HISTORY and the FUTURE

History and the Future 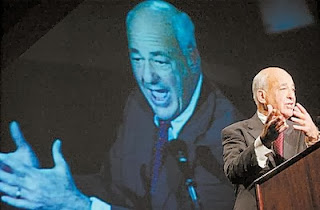 The first two days the audience included a lot of high school and college students who were eligible to receive academic credit for attending, but since that wasn't so on Saturday, the crowds were slightly smaller, and older.

After Ben Wecht welcomed everyone he began to introduce the speakers for the final day of the symposium, including David Talbot, who gave his talk on the subject of his next book, "Allen Dulles: Chairman of the Board of the Assassination."

Talbot was followed by Jim DiEugenio whose talk on "JFK's Foreign Policy: A Motive for Murder," was very persuasive.

I sat in the back of the room with Russ Baker while David and Jimmy gave their talks, and DiEugneio's detailing of JFK's African policy of supporting national revolutions against colonial rule took some doing with DeGaul in Algeria and Vietnam and came into play with the Cubans in the Congo and East Africa, and made me think of Jack Crichton's support of a group opposed to JFK's foreign policy in Africa.

While Sherry P. Fiester presented "Trajectory Analysis for the Fatal Head Shot" in the other room, Walt Brown, Ph.D. gave his talk on "The Assassination Sponsors."

Sherry was probably the only certified forensic investigator to make a presentation and while I missed it, I have read her reports and agree with her analysis.

In the afternoon session Jeff Morley gave his well received talk on "What the Government is Still Hiding and How to Find It, while Brian D. Litman did his talk in the other room on "Tourist Non Grata: The Soviet Experience of Oswald (and who the KGB Chairman Really Thought Who Did It.)

When listing the most important records still being with held - he listed the CIA records first and the unedited and complete Air Force One radio transmission tapes as second - saying that they are extremely important because they give an accurate insight into the reaction to the assassination at the highest levels of government.

I was proud and honored when Morley said from the podium that "Bill Kelly is doing important and heroic work on the Air Force One tapes,"  and by combining them for easier study, he said we were doing something that the government itself should be doing. As I realize its importance, it means so much more coming from him.

While my good friend and colleague John Judge was giving a talk called "A Call to Action: Why it Still Matters and What Needs to be Done," Lisa Pease reported on "The Covert Corruption of Culture: How our Reaction to JFK's Assassination and Cover-up Determines our Future," which looks at the assassination from a unique angle that I will go into in more depth as it was a very illuminating presentation.

The final panel discussion on "Passing the Torch: The Future of JFK Assassination Research and Advocacy," included David Talbot, Jim DiEugenio, Robert Groden, Walt Brown, Jeff Morley, Lisa Pease and John Judge, and was moderated by Cyril Wecht, who took turns asking each of the panel pertinent questions before they took questions from the audience.

At the very end, the last question of the day was the most pertinent, as a 70 year old retired history teacher asked, "What do you want us to do?".

And the answer was to contact your representatives in Congress and ask them for oversight of the JFK Act, and hold congressional hearings on the destroyed, missing and still withheld records, ask President Obama to issue an Executive Order releasing all the remaining sealed records now, to seek a grand jury investigation into the crimes related to the assassination and to bring these issues back to your communities and as David Talbot suggested, use the social media - Facebook, Twitter and the internet to spread these messages.

Posted by William Kelly at 4:17 PM