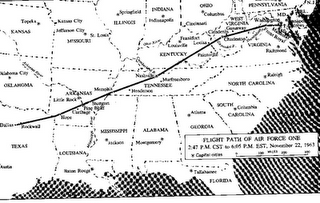 There are a number of different time references on the Air Force One Radio Transmission Tapes and the Andrews Log.

Events as they happened in Dallas are in Central Standard Time (CST), which is one hour difference from Washington, D.C., which is on Eastern Standard Time (EST), while the pilots, military personnel and radio operators used 24 hour military style and Zulu time, which is Grenwich Mean Time (GMT) in England, five hours earlier than EST.

What is "Zulu" time?
"Zulu" time is that which is more commonly know as "GMT" (Greenwich Mean Time). Our natural concept of time is linked to the rotation of the earth and we define the length of the day as the 24 hours it takes (on average) the earth to spin once on its axis.

As time pieces became more accurate and communication became global, there needed to be a point from which all other world times were based. Since Great Britain was the world's foremost maritime power when the concept of latitude and longitude came to be, the starting point for designating longitude was the "prime meridian" which is zero degrees and runs through the Royal Greenwich Observatory, in Greenwich, England. When the concept of time zones was introduced, the "starting" point for calculating the different time zones was agreed to be the Royal Greenwich Observatory.
Unfortunately the Earth does not rotate at exactly a constant rate. Due to various scientific reasons and increased accuracy in measuring the earth's rotation, a new timescale, called Coordinated Universal Time (UTC), has been adopted and replaces the term GMT.

The Navy, as well as civil aviation, uses the letter "Z" (phonetically "Zulu") to refer to the time at the prime meridian. NOAA satellites use Zulu Time or Coordinated Universal Time (UTC) as their time reference. The satellite images that appear on NOAA's Web sites are stamped in Zulu time. The Department of the Navy serves as the United States official timekeeper, with the Master Clock facility at the U.S. Naval Observatory, Washington, D.C.

Greenwich, England has been the home of Greenwich Mean Time (GMT) since 1884. GMT is sometimes called Greenwich Meridian Time because it is measured from the Greenwich Meridian Line at the Royal Observatory in Greenwich. Greenwich is the place from where all time zones are measured.
Check out the GMT timestamp to see how accurate your computer time is.
The Greenwich Meridian (Prime Meridian or Longitude Zero degrees) marks the starting point of every time zone in the World. GMT is Greenwich Mean (or Meridian) Time is the mean (average) time that the earth takes to rotate from noon-to-noon.

GMT is World Time and the basis of every world time zone which sets the time of day and is at the center of the time zone map. GMT sets current time or official time around the globe. Most time changes are measured by GMT. Although GMT has been replaced by atomic time (UTC) it is still widely regarded as the correct time for every international time zone.
Where is Greenwich, England?

12:34 PM CST First UPI "A" wire transmission: Dallas, Nov. 22 (UPI) –Three shots were fired at President Kennedy’s motorcade today in downtown Dallas. JT1234PCS - 1234PCS means 12:34 Central Standard time. David Lifton: “The first transmission (above) was the result of Merriman Smith excitedly talking to someone at the UPI Dallas office, who then typed it onto the actual teletype machine, and then pressed "send".

David Lifton: “Then Smith commandeered a phone at Parkland, called New York UPI, and some of his next transmissions were sent from New York City.”

2:35 CST AP Dallas, Tex., Nov. 22 (AP) -- The Dallas Police Department today arrested a 24 year-old man, Lee H. Oswald, in connection with the slaying of a Dallas policeman shortly after President Kennedy was assassinated. He was also being interrogated to see if he had any connection with the slaying of the President. Oswald was pulled screaming and yelling from the Texas Theater in the Oak Cliff section of Dallas.

2:43 CST - WFAA and WBAP radio named Oswald. WBAP's David Daniel interrupts for word from Dallas Police of the arrest of "a 24-year-old man, Lee H. Oswald" in connection with the shooting of Dallas Police Officer J.D. Tippit. He's being questioned to see if he has any connection with JFK assassination. "Oswald was pulled screaming and yelling" from the Texas Theater in the Oak Cliff section of Dallas. After a pistol is taken from him during a scuffle, he's quoted as saying, "It's all over now."

3:08 PM (CST) UPI’s completely false version of the theater arrest—but with no mention of Oswald (just a “suspect”) and with Tippit being located inside theater, shot there, and suspect being arrested there.

Dallas, Nov. 22 (AP) - A 24-year-old man who said two years ago he wanted Russian citizenship was questioned today to see whether he had any connection with the assassination of President Kennedy. He was identified as Lee Harvey Oswald of Forth Worth. He was pulled screaming and yelling from the Texas Theater in the Oak Cliff section of Dallas shortly after a Dallas policeman was shot to death. On Nov. 1, 1959, Oswald told the U.S. Embassy in Moscow he had applied for Soviet citizenship. He said he had been a tourist in Russia since October 13, that year. Oswald was reported to have a Russian wife. The Fort Worth Star-Telegram confirmed that the man held in Dallas was the same Oswald and said his mother was being taken to Dallas Police headquarters to see him.

3:46 PM CST First UPI mention of LHO now portrayed as JFK’s assassin, and linked to FPCC. Lifton Notes: “This is designated UPI A 104/Bulletin. Although this dispatch is the first UPI mention of Oswald, it is not the first UPI mention of an arrest in the JFK case. This UPI dispatch is critical because it identifies LHO as “the prime suspect” in the JFK assassination and links him to the Fair Play for Cuba Committee. Dallas, Nov. 22 (UPI)--Police today seized Lee H. Oswald, identified as chairman of a "Fair Play for Cuba Committee," as the prime suspect in the assassination of President Kennedy. (more) Police said Oswald, 24, was accused in the slaying of a Dallas policeman shortly after the shooting of the President. Police Capt. Pat Gannaway said the suspect was an employee in the building where a rifle was found. Gannaway said the suspect had visited Russia and was married to a Russian. This was not immediately confirmed. First UPI mention of LHO (3:46 PM CST) now portrayed as JFK's assassin, and linked to FPCC.