"Pentagon taking its own steps..." - Bundy 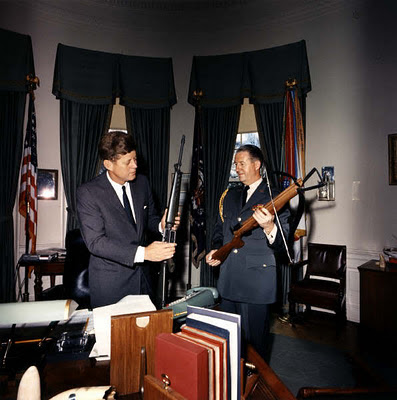 
While aboard AF1 "Ted Clifton talked to Bundy, too, asking again whether an international plot was emerging. It was not a discreet inquiry. Trimble's patches were not secure....Bundy replied crisply that the Pentagon was talking its own steps..."

In his book Death of a President (p. 341) William Manchester wrote:

"Aft of the cockpit Signalman John Trimble was too busy to brood. He had three phone patches going to the communications shack, and he was using Hanson's UHF and VHF sets, yet it wasn't enough. Every official in Washington it seemed, wanted to talk to Air Force One...Several conversations were trivial....Lem Johns was forwarding instructions to the White Hosue Communications Agency, and Bill Moyers was talking to Walter Jenkins and Mac Bundy. (Ted Clifton talked to Bundy, too, asking again whether an international plot was emerging. It was not a discreet inquiry. Trimble's patches were not secure. They could be bugged. Bundy replied crisply that the Pentagon was taking its own steps.) But the bulk of the verbal traffic was about President Kennedy..."

9. "That Friday Lyndon Johnson did not know that John Kennedy had ordered the taping of all Angel conversations while the plane was in flight. On April 21, 1964, this writer learned that the Love-to-Andrews tape still existed. Since security was not involved, it was first thought that a complete transcript of it would serve as a useful appendix to this book.Presidential consent was withheld, however. On May 5, 1965, the author was permitted to read an edited transcript at the White House. Doubtless the tape will be available to future historians." 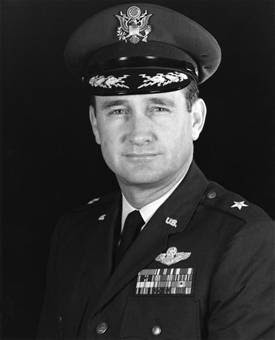 I have been asked to respond to your letter, addressed to the White House Communications Agency, concerning a tape recording to [sic] Air Force One, November 22, 1963.

Logs and tapes of the radio transmissions of military aircraft, including those of Air Force One, are kept for official use only. These tapes are not releasable, nor are they obtainable from commercial sources.

I am sorry my response cannot be more favorable.

James U. Cross served as Lyndon Johnson's pilot from 1962 until mid-1968. Cross retired from the Air Force as a Brigadier General and commander of Bergstrom Air Force Base in 1971. Today he lives in Gatesville, Texas.

"What a delightful, honest, and entertaining story Jim Cross tells. Here is a man who was so close to power he would come down with a cold if the President sneezed (and could have brought a lot of us literally down with him), but he never forgot his roots in rural Alabama. A man whose daddy worked for the Horseshoe Lumber Company grows up to serve the most powerful man in the world, and his account of that amazing journey —some of it scarily bumpy, as I can testify — is a bird's-eye view, from the cockpit of Air Force One, of why character counts." -Bill Moyers

"General Cross is an American hero and the hero of generations of Johnsons. Daddy used to say there are two types of people; the talkers and the doers. General Cross was always a "can do" presence in our lives. No job was too great or too small for God, country, and his friends. Jim Cross has led a dynamic life in service for others, and I have no doubt generations yet to come will be enriched by his worthy story, as our family always has been." - Luci Baines Johnson

When Lyndon Baines Johnson wanted to go somewhere, there was no stopping him. This dynamic president called for Air Force One as others summon a taxi—at a moment's notice, whatever the hour or the weather. And the man who made sure that LBJ got his ride was General James U. Cross, the president's hand-picked pilot, top military assistant, and personal confidante. One of the few Air Force One pilots to have a position, simultaneously, in the White House, General Cross is also the only member of LBJ's inner circle who has not publicly offered his recollections of the president. In this book, he goes on the record, creating a fascinating, behind-the-scenes portrait of America's complex, often contradictory, always larger-than-life thirty-sixth president.

General Cross tells an engrossing story. In addition to piloting Air Force One around the globe, he served President Johnson in multiple capacities, including directing the Military Office in the White House; managing a secret two-million-dollar presidential emergency fund; supervising the presidential retreat at Camp David, the president's entire transportation fleet, and the presidential bomb shelters; running the White House Mess; hiring White House social aides, including the president's future son-in-law, Charles Robb; and writing condolence letters to the families of soldiers killed in Vietnam. This wide-ranging, around-the-clock access to President Johnson allowed Cross to witness events and share moments that add color and depth to our understanding of America's arguably most demanding and unpredictable president.

Brigadier General James U. Cross is commander of the 75th Tactical Reconnaissance Wing at Bergstrom Air Force Base, Texas.

General Cross was born in Andalusia, Ala., in 1925. He attended local schools in the Andalusia area and graduated from Pleasant Home High School. He began his military career by enlisting in the U.S. Army for pilot training and was commissioned a second lieutenant, Army Air Corps, in November 1944.

During World War II in November 1944, he went to the China-Burma-India Theater where he was a transport pilot flying "the Hump." He was relieved from active military duty in April 1946 and became a member of the Air Force Reserve.

He attended Alabama Polytechnic Institute (now Auburn University), Ala., for two years until he was recalled to active duty in October 1948 to serve at Clark Air Base, Republic of the Philippines. Subsequently he has served in Tactical Air Command, the Northeast Air Command, Military Air Transport Service, and Military Airlift Command.

His next assignment was to Headquarters Eighteenth Air Force, Donaldson Air Force Base, S.C., where he served successively as flying safety officer, inspector, and then pilot with the 63rd Troop Carrier Wing. In February 1956 he went to Goose Bay Air Base, Newfoundland, as operations officer with the 6606th Air Base Group.

General Cross was a pilot with the 40th Air Transport Squadron at Dover Air Force Base, Del., from February 1957 to September 1958. He next went to Bolling Air Force Base, Washington, D.C., where he served as a pilot for VIP aircraft.

His hometown is Andalusia, Ala.

Retired Brig. Gen. James U. Cross, who now lives in Gatesville, served as Lyndon Johnson's pilot from 1962 until 1968. He has written a book about his experiences, "Around the World with LBJ" (University of Texas Press, $26.95 hardcover, with Denise Gamino and Gary Rice).

Cross tells the story in his own words and in an easy-reading, entertaining style.

"My Secret Service code name was Sawdust," Cross writes. As LBJ's pilot, "I bucked the inviolate military chain of command to fly where and when he wanted. Protocol, rules, and red tape couldn't stop us. We did it his way, obstacles be damned. He wasn't always the most pleasant personality to be around, but he was best co-pilot in adventure anyone could ever have had."

But, Cross adds, "Flying was just the half of it. I was the only Air Force One pilot in history to have one foot in the cockpit and the other in the White House. I flew the plane and joined the political ground crew, too."

Cross writes in first person about his time with Vice President and then President Johnson. "One day," he said, "he ordered me to fire a general - and I was only a major." Later, as a colonel, Cross was again ordered to fire a general.

Cross said Johnson confided his thoughts about how much he disliked being vice president and how he looked forward to going back to his Texas ranch after his term ended. He said he only took the job because Democratic leaders insisted that Richard Nixon would win the 1960 election if he didn't.

Of course, all that changed on Nov. 22, 1963. Cross continued to serve as LBJ's pilot and confidant until 1968, after Johnson announced he would not run for re-election. Johnson promoted Cross to brigadier general and got him appointed commander of Bergstrom Air Force Base at Austin.

"I was a one-man army in service to LBJ and my country," Cross reflects. "To have been given the opportunity to build a relationship with this uncommon common man was the gift of a lifetime."
Posted by William Kelly at 9:40 AM

"James U. Cross served as Lyndon Johnson's pilot from 1962 until mid-1968. Cross retired from the Air Force as a Brigadier General and commander of Bergstrom Air Force Base in 1971. Today he lives in Gatesville, Texas."

Hmmm. Only a half hour away from me.

Hi Linda, Why don't you take a drive over to visit him and see if he has an unedited copy of the AF1 tapes in his closit or under his bed? BK

Bill, there have been some recent releases of various Air Force One Tapes Post JFK 11-22-63. (I am former U.S. Secret Service and still maintain an "interest" in this case. john.a.carman@gmail.com