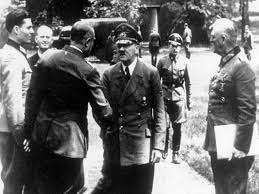 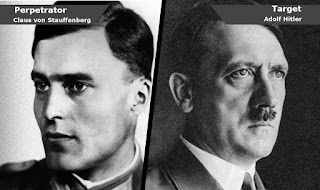 At first the CIA responded to the August 25, 2012 Assassination Archives and Research Center (AARC) FOIA request for all CIA records pertaining to the CIA's "detailed study" of the July 20, 1944 plot to kill Hitler to be adapted for use against Castro, as it us described in the Higgins Memo of the September 25 meeting of the Joint Chiefs of Staff, by saying that they found no responsive records,

Then, after six fruitless years of looking among their files for any mention of the Valkyrie plot to kill Hitler without success, the CIA backtracked and admitted they found this one document - a 1964 psychological warfare report that lists dozens of dates and opportunities to counter Communist propaganda with propaganda of their own, including the utilization of the 20th anniversary of the July 1944 attempt to kill Hitler that was betrayed by Communists.

It is very interesting that the very first item is a reference to an article on South America by Hal "the Spook" Hendrix, an asset of David Atlee Philips, who called Seth Kantor in Dallas from Florida on the day of the assassination to give him deep background information on Lee Harvey Oswald, who had not yet been officially accused of the assassination.

The July 20, 1964 - 20th anniversary of the German military plot to kill Hitler is viewed as a good opportunity to show how the Soviet Communists supported Hitler and betrayed some of those who were involved in the plot, arranging for the Gestapo to arrest them a few weeks before the attempt.

This is the relevant extract from this document:

BACKGROUND: [Note. The Communists were never  anti-Fascist in the sense of being against oppressive totalitarianism. They were and are against everything, including free democratic ideologies, that might thwart their imposition of their own brand of totalitarianism. They indifferently support anything or attack anything in maneuvering toward their own goal of eventual domination. It would be difficult to present evidence proving conclusively that the Communists, as a tactic to insure their own takeover in Germany after her defeat in WW II, intentionally informed the Gestapo of the conspiracy against Hitler in June 1944. It would be simpler to prove that the German Communist, due to their own lack of security precautions, were penetrated by the Gestapo. However, established writers have made statements in their published works which at least implicate the Communists in exposing this last plot to kill Hitler. These statements can be used to seriously damage the self-image the Communists try to create of being the saviors of those threatened by Fascism.]

“Fascist resurgence  and Nazi revanchism” is a dead horse which Communists propagandists have flogged ad nauseam since World War II. Twentieth anniversary of the attempt to assassinate Hitler on July 20th offers good occasion for a public reminder that Hitler and fascism could never have come to power without the support of Stalin and the German Communist Party, acting under the direction of Moscow. Different writers have suggested that the Communists actually saved Hitler in 1944 by deliberately betraying the assassination plot to the Gestapo. (See unclassified attachment). The failure of the assassination attempt led to the near obliteration of what moral fiber remained in Germany officialdom, while causing incalculable and needless additional human suffering.

Numerous eminent or high ranking personages in Nazi Germany were convinced that Hitler must be killed and were fully prepared to do so personally. Elaborate plots and active attempts were thwarted by mischance or the fantastic security measures surrounding Hitler’s person. Spurred to new efforts by the success of the Allied invasion in mid-1944, a conspiratorial group centered around Dr. Karl Friedrich Goerdler began to take desperate measures to assassinate Hitler and depose his Nazi retinue.

This conspiracy included all of the numerous anti-Nazi elements in German except the illegal German Communist Party (KPD), the remnants of which had been driven underground. On 22 June 1944 the conspirators reluctantly broke a long-standing resolve by taking into their confidence two surviving members of the KPD, hoping that the latter could at least be counted on to cooperate against the Nazis. Two Social Democrats among the conspirators Reichwein and Leber, met with KPD representatives Saefkow and Jacob, who brought with them a third man introduced as “Rambow.” Rambow turned out to be a Gestapo informer, and REichwein and Leber were arrested by the Gestapo on July 4th and 5th.

This forced the precipitate action, and Count Claus von Stauffenberge was nominated to personally plant a brief-case bomb under the staff conference table during the 20 July visit by Hitler to his Rastenburg field Headquarters in East Prussia. Owing perhaps to the haste of the preparations, Hitler survived the blast without serious injury. His revenge was a fratricidal purge which involved 7,000 arrests and 5,000 deaths, eliminating the potential for any further anti-Nazi movement within Germany.

During the winter of 1944-45 what remained of the spiritual elite of Germany was behind bars. Those who remained alive in April 1945 were, so far as possible, shot out of hand by the S.S. least they survive the war and play the part that would naturally have been theirs in post-war Germany. 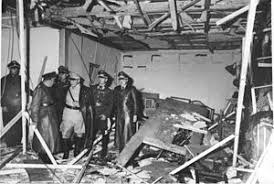 Posted by William Kelly at 1:08 PM