Dispensing With Oswald - the Fall Guy

DISPENSING WITH OSWALD THE FALL GUY 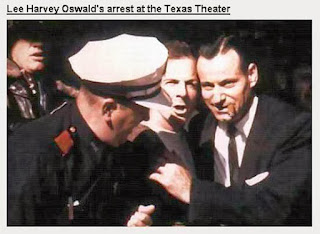 “Here you chumps, is your criminal!”

“As long as I can do that I can put my thumb to my nose and wiggle my fingers at all of the laws in the book.” – Sam Spade

In the classic photo of Lee Harvey Oswald being taken under arrest, the cigar chomping Dallas detective Paul Bentley escorts Oswald out of the Texas Theater, pushing the Fall Guy - as Dashiell Hammett put it - to his day of reckoning.

Dashiell Hemmett was working for the Pinkerton Detective Agency - the first Secret Service, before he began writing pulp fiction detective novels that featured San Francisco private eye Sam Spade, who had it all figured out.

Chapter 14 of Hammett's The Maltese Falcon is called “The Fall Guy,” where Sam Spade explains the situation is in need for a Fall Guy, and you have to imagine Humphrey Bogart playing the part.

"There's another thing that's got to be taken care of first,” Spade says, “We've got to have a fall-guy. The police have got to have a victim - somebody they can stick those murders on. The way to handle them is to toss them a victim, somebody they can hang the works on. I get away with it because I never let myself forget that a day of reckoning is coming. I never forget that when the day of reckoning comes I want to be all set to march into headquarters pushing a victim in front of me, saying 'Here, you chumps, is your criminal!'"

"As long as I can do that I can put my thumb to my nose and wiggle my fingers at all the laws in the book. We've got to give them a victim. Let's give them the punk. He's made to order for the part. Let's pin the necessary evidence on him and turn him over to them."

But, Spade re-considers, “Will they stop right there? Or will the Fall Guy be a fresh clue?"

[From: Dashiell Hammett - The Maltese Falcon - Chapter 14 - The Fall Guy]

And that’s the way it was in Dallas when Lee Harvey Oswald was fingered as the culprit, the cop-killing Presidential assassin.

But, as Sam Spade says, “…will the Fall Guy be a fresh clue?”

As for most JFK assassination researchers, Oswald is the key, whether the assassin or Fall Guy, he’s the clue that either did it all by himself or the one that is the “fresh clue” that leads to the actual sponsors of the murder.

Many if not most of the JFK assassination researchers have focused their attention on Oswald, and he is now the most examined individual in the history of the world, as we have so many records on him that we should all agree on who he was, what he did and why he did it. But we don’t.

When Oswald served in the U.S. Marine Corps in San Diego and Japan, he was known by his nickname, “Ozzie the Rabbit,” a take-off on a then popular comic strip, but one that serves him well, as he was the rabbit that was let loose at Dealey Plaza for the bloodhounds to follow.

And those who do follow him, from the Texas School Book Depository (TSBD) to Oak Cliff and Texas Theater, follow him into the “Rabbit’s Hole” of Alice’s “Through the Looking Glass,” and enter a world that is unreal, though it can be understood.

Oswald is not the answer to the JFK assassination, but he is a clue that could lead to the actual perpetrators.

From the open source records available today it can be said with some certainty, that the 80 percent of the people who don’t believe Oswald killed the President alone, have good reasons for their belief.

It can be said with some documented certainty that Lee Harvey Oswald was not the Sixth Floor Sniper because numerous witnesses place Oswald on the first and second floors of the Texas School Book Depository (TSBD) at the time of the murder and the Sixth Floor Sniper did not fit a description of Oswald (white shirt, bald spot).

It can be documented and reasonably demonstrated that Lee Harvey Oswald was not even on the sixth floor at the time of the assassination, so he was not the shooter, did not kill the President, and was the Patsy framed for the crime as he claimed to be.

As we close in on the actual assassins, we learn that Oswald  the Patsy was the Fall Guy framed as the assassin by people who knew him, as someone framed for a murder must be an associate of the actual killers. So Oswald is a Person of Interest, as criminal investigators say, but not a suspect. He can and should be exonerated, so we can focus on those actually responsible.

In that sense, Oswald is still worth investigating, and there are few people who know Oswald as well as a handful of JFK assassination researchers who have studied him under a microscope, though they don’t agree on who he really was, what he believed, or why he did anything.

And while Oswald does supply a lot of information, facts and evidence in the case of the murdered President, he is not the answer, as he was set up as part of a covert intelligence operation – a psych-war disinformation cover-story that tried to blame what happened at Dealey Plaza on Fidel Castro.

Oswald was not the only “expendable” patsy in the crime of the century, as after Oswald was killed, dozens of others were systematically murdered and eliminated, most of which remain unsolved homicides, cold cases that can and should be officially investigated and resolved to a legal and moral certainty.

As Edwar Lester Pearson quotes Percy Bysshe Shelly in his poem, “The Masque of Anarchy” in "Studies In Murder":

"I met Murder on the way –
He had a mask like Castlereagh:

Very smooth he looked, yet grim;
Seven bloodhounds followed him.

All were fat; and well they might
Be in admirable plight,

For one by one, and two by two,
He tossed them human hearts to chew."

Lee Harvey Oswald was only one of the first human hearts that was tossed to the bloodhounds who followed him.

And only now are we learning the identities of those who wear the mask of Castlereagh.

But the bottom line is – Lee Harvey Oswald didn’t kill the President, and those who did the deed were allowed to get away with it.

While many knowledgeable people say we will never know the full truth, I think we already know it, and are now only filling in the details.

What must happen, and I'm not confident it will happen, is what Shelley says: we must

"Rise like Lions after a slumber, in unvanquishable numbers - Shake your chains to earth like dew, Which in sleep had fallen on you - Ye are many - they are few."

Posted by William Kelly at 1:39 AM

Thanks for the summary.

Oswald himself told us he was a patsy, or fall guy - this as he was being led past a group of reporters and a TV camera.

For the reasons you list it is apparent that Oswald couldn't have been ONE of the shooters.

For me the most credible evidence is the testimony of the physicians who saw JFK at Parkland - ER dcos are straight shooters (no pun intended) and aren't going to make stuff up. Those a Parkland had seen enough gunshot wounds to know the difference between an exit and an entry wound.

The first doc to see Kennedy upon his arrival at Parkland was Dr. Red Duke, who was in charge of the ER that day. Red took one look and recognized the non-survivable nature of the head wound and turned the case over to others. Red then attended to John Connally, operating for several hours on the chest wound an saving the governor's life. Red told me personally about 20 years ago that the Warren Commission with it's single shooter idea was "total bull shit."

Dr. Charles Crenshaw waited many years to speak up, but after he finally forced himself to read the Warren Report, he knew he had to tell us his observations. Crenshaw saw two entry wounds: mid-line into the trachea and into the front part of the right temple. The physician team in Trauma Room One was never aware of the entry wound in JFK's back, because vital signs ceased before they could turn him over to complete the examination. This means there were at least two shooters.

After Jackie had said her last words over the corpse of her husband, Crenshaw and Parkland's extremely experienced forensic Pathologist, Dr. Earl Rose, were escorting JFK's corpse to the morgue for the legally required autopsy. Crenshaw reports that when Rose refused to break the law and release the corpse without the autopsy, Federal agents abducted the body at gunpoint.

Wikidpedia says, "After being shoved by Kennedy's aides, he (Rose) stepped aside and allowed Kennedy's body to be removed from Parkland Memorial Hospital without performing an autopsy." This is a lie of omission. The body was abducted at gunpoint, and ALLEGEDLY taken to Bethesda Naval Hospital, thus breaking the chain of medical evidence. The Federal agents were never prosecuted for drawing the guns in the hospital, for assault, or for abducting the corpse. They should have served prison time.

Although I don't agree with it all (e.g.the so-called mysterious deaths list is bollocks) it is still a nice bit of writing, Bill.

Yes, as we have discussed, Oswald's exoneration is a necessary step leading to those who were behind this. But you need to know your patsy to know all the players.

My point has always been that any private attempt to "expose" anyone else will be ignored as being just another conspiracy theory. Oswald's exoneration is possible through DNA and a thorough forensic examination of all official witness statements, investigative reports and news reports generated that weekend. Everything following that, should be viewed as potentially tarnished.

Once Oswald is exonerated, the case may be reopened. There is no shortage of new evidence for the authorities to chew on.