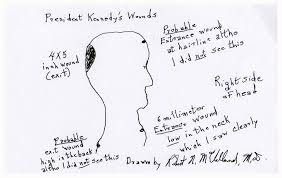 OCT 17, 2013
A surgeon who half a century ago was among the doctors who tried to save President John F. Kennedy's life said Thursday that the Warren Commission got it wrong in determining a lone gunman assassinated JFK in Dallas on Nov. 22, 1963.

Speaking via teleconference to a Duquesne University symposium marking the 50th anniversary of the assassination, Robert N. McClelland said he was the first doctor in Parkland Hospital's Trauma Room One to notice the massive wound in the back of Kennedy's skull and that a trauma of that size had to be an exit wound.

"The whole right side of his skull was gone. I could look inside his skull cavity. Obviously, it was a mortal wound," he told a spellbound audience of legal, medical, forensic and investigative experts and the public who packed the university's Power Ballroom.

Dr. McClelland, now 83 and professor emeritus at the University of Texas Southwestern Medical Center, said that because it was an exit wound, it logically followed that it had been fired from in front of the president's limousine. And, in turn, that meant a second gunman was involved in the assassination, contradicting the Warren Commission's finding that there was but one assassin.

The Warren Commission determined that Lee Harvey Oswald acted alone when he fired three times with a high-powered rifle on the president's motorcade in Dealey Plaza from the sixth floor of the Texas School Book Depository. The commission said that one bullet missed, another went through the president's neck and also wounded Texas Gov. John Connolly -- the so-called "single bullet theory" -- and the third caused the fatal head wound.

But Dr. McClelland was resolute. "Having seen what I saw" in the emergency room and then viewing the Zapruder film of the assassination, he said, he believes JFK "was initially hit from a bullet fired from the sixth floor that went through his back and out through his neck. The next injury was caused by somebody behind the picket fence on the grassy knoll firing a shot that blew out the right side of his head."

Speaking on the first day of the three-day symposium sponsored by the university's Cyril H. Wecht Institute of Forensic Science and Law, Dr. McClelland also recounted how two days after Kennedy's assassination he and other surgeons tried in vain to save Oswald's life after he was shot by Jack Ruby while being transferred from Dallas police headquarters to the county jail.

In his address, Dr. Wecht, the renowned forensic pathologist and longtime critic of the Warren Report, railed against what he called was the "inept, inexplicable, totally incompetent" autopsy performed on the president by Navy pathologists James J. Humes and J. Thornton Boswell. They concluded the president had been struck by two bullets, fired from above and behind, with the fatal shot being the one that struck his head.
"They had never done a single gunshot wound autopsy before. If you heard of this in another country, you'd say condescendingly and dismissively, 'What do you expect from that country?' but this was our country," Dr. Wecht said. "This should bother you so much; this should be so distressing, even 50 years later."

Dr. Wecht, who used a skull and dissected a brain during his address to illustrate his criticism of the autopsy and what wasn't done, said the "cold case" needs to be reopened.

"The Warren Commission Report is scientifically absurd," he said. The burden of the report's detractors is not to have all the answers about the assassination, he said, but to point out defects in the investigation, which they have done. He received a standing ovation.

Among the speakers today will be Academy Award-winning filmmaker Oliver Stone, director of the controversial 1991 film "JFK" and director/narrator of the Showtime docu-series "Oliver Stone's Untold History of the United States."

Signed drawing entitled ''President Kennedy's Wounds," rendered by Dr. Robert McClelland, one of the physicians who attended to John F. Kennedy at Parkland Hospital after the President was shot.Nate D Sanders Auctions

A fascinating drawing by the surgeon who tried to save John F. Kennedy’s life could sensationally prove Kennedy was shot by two different gunmen.

Dr. Robert McClelland held JFK’s head as he went into theater at Parkland Hospital after he was gunned down while traveling through Dallas, Texas, in an open-top convertible in 1963.

Nothing could be done to save the President and he died, aged just 46, 20 minutes after arrival, sparking an unprecedented outpouring of grief across America.

McClelland later drew a rudimentary sketch of the right side of Kennedy’s head and noted the entrance and exit wounds of the bullets, supposedly fired by lone assassin Lee Harvey Oswald.

The surgeon noted two different entrance wounds – one low in the neck and one at his hairline – which crucially came from different directions, suggesting there were two separate shooters.

He noted that the horrific fatal wound to the back of the President’s head was from a bullet exiting the skull rather than entering it.

This is in conflict to the lone gunman theory as Oswald was behind Kennedy’s motorcade when he fired the shots from the sixth floor of a book depository building.

McClelland has previously questioned the conclusion of the Warren Commission report into the assassination, which found that Oswald acted alone.

The respected surgeon’s drawing, which has been put up for auction, appears to support the theory that a second shooter stood on the grassy knoll in front of the motorcade.

McClelland’s sketch, which he signed, shows a large four to five inch exit wound at the back of JFK’s head.
This, he suggests, correlates to an entry wound at Kennedy’s hairline, although he admits he didn’t see that wound properly.

Yet, he is adamant that he saw “clearly” another entry wound low in the neck.

McClelland believed the first bullet hit Kennedy in the back, not in the front as was assumed at the time.
He also insists the second shot hit the iconic Democrat throwing his head violently backward which would only happen if he was struck by a bullet from the front and not above and behind.

President John F. Kennedy is struck by an assassin’s bullet as he travels through Dallas in a motorcade.Getty Images

The compelling drawing – which has been in the hands of a private collector for years – has emerged for auction 54 years after JFK’s assassination and is tipped to sell for nearly $4,000.

Michael Kirk, auctioneer at US-based Nate D. Sanders, which is selling the sketch, said the drawing is credible proof that more than one killer was involved in the infamous assassination.

He said: “McClelland saw Kennedy’s wounds first hand when he was brought into the emergency room and he has always been of the mind that they were consistent with two shooters.

“He is a credible surgeon who has believed for more than 50 years that the wound that did the most damage could not have come from a bullet above and behind, but only from a shooter stood in front of Kennedy.
“There are legions of people who believe that there was something more than was reported in the Warren Commission which concluded Oswald was acting alone and this diagram gives credence to their theory.”
Kennedy was assassinated while traveling through Dallas, Texas, in an open-top convertible on November 22, 1963.

Kennedy was pronounced dead 30 minutes later at Parkland Hospital. He was 46 years old.

Less than an hour after Kennedy was shot, Oswald killed a policeman who questioned him on the street near his dormitory in Dallas.

Thirty minutes later, Oswald was arrested in a movie theater by police responding to reports of a suspect.
On November 24, he was brought to the basement of the Dallas police headquarters on his way to a more secure county jail.

As Oswald came into the room, nightclub owner Jack Ruby emerged from the crowd and fatally wounded him with a single shot from a concealed revolver.

In a twist of fate, McClelland also operated on Oswald after the prime suspect was fatally shot in the abdomen two days later.

The Warren Commission was a nearly year-long investigation led by Chief Justice Earl Warren that concluded Oswald acted alone in assassinating Kennedy and that there was no conspiracy involved.
The hotly anticipated auction ends on Thursday.

Posted by William Kelly at 3:37 PM