SPECIAL: Chapter 15 of John Newman's "Into the Storm" - Upgraded

FROM JOHN NEWMAN'S "Into the Storm" 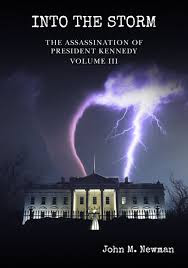 SPECIAL - John Newman has permitted JFKCountercoup to post his end chapter 15 of "Into the Storm" - Volume 3 of his ground breaking multi-volume study of the assassination of President Kennedy, and the "intermission" before continuing the quest in Volume 4.

This is copyrighted material, do not copy, paste or quote at length without the permission of the author.

As John Newman writes in the Introduction to this book, "Any standard - i.e., open-minded - examination of the events in Volume II and IV is encumbered by a labyrinth of deceptive information. The inaccurate and false clutter must first be succinctly identified and processed, and then disposed of, before the task of assembling the true sequence of events can begin....And so I found myself struggling for months on end trying to peer through the fog created by Yuri Nosenko, Samuel Halpern, and Antonio Veciana. Their stories are fraught with deception and inaccuracies. And so, I have resorted to putting their accounts under an electron microscope. In the end, I arrived at an intermission - a dark zone between the events that took place leading up to the summer of 1962 and what they portended for the rest of the Kennedy presidency. And I chose....to share my findings in Volume III without knowing how things will turn out in Volumes IV and, if necessary, beyond......"

CHAPTER FIFTEEN
INTERMISSION:
THE WINDS OF WAR
At the precisemoment President Kennedy launched Operation Mongoose—on 3 November 1961—official Washington was already in an uproar over the report General Taylor had made that same day recommending that 8,000 U.S. combat troops be deployed in South Vietnam (see JFK and Vietnam, 2017 edition, Chapter Seven).  Taylor had just returned from a mission to Vietnam for which the president had instructed him not to come back with a recommendation for U.S. military intervention.  Kennedy was so shocked by Taylor’s recommendation that he tried, unsuccessfully, to suppress it by recalling copies of the final report.[i] Taylor’s recommendation to send combat troops was a very closely held secret.
The fact that the president tried to suppress a recommendation to send combat troops to Vietnam on the same day that he launched Operation Mongoose tells us a lot about how he would react to a similar recommendation to send American combat troops into Cuba.  No record of the 3 November meeting that launched Mongoose has ever been found.[ii]  However, the decisions reached that day were summarized in a 30 November 1961 memorandum from the president to his senior cabinet members, as well as General Taylor and General Lansdale. Kennedy told his subordinates to “go ahead” with the project to “overthrow” the Castro regime.[iii]
Lansdale made use of that presidential memorandum in a report he authored on 20 February 1962.[iv]  But Lansdale’s report was remanded six days later by the Special Group (Augmented—SGA) because he had asked if the president would approve U.S. military intervention in Cuba.  I mentioned that key SGA meeting in Chapter Fourteen and promised to revisit it here.  Before I do that, I want to draw the reader’s attention to the fact that eight days before the president gave the “go ahead” for Mongoose on 30 November 1961, he had overruled a recommendation by Secretary McNamara, Secretary Rusk, the Joint Chiefs and General Taylor, for U.S. military intervention in Vietnam.  Etched in stone in NSAM-111 on 22 November 1961, that was the defining decision on Vietnam during Kennedy’s presidency.  It was promulgated two years to the day before his assassination.

The Battle Between General Lemnitzer and President Kennedy Over War in Vietnam
The key NSC meeting leading up to President Kennedy’s decision against intervention in Vietnam occurred on November 15, 1961.  During that meeting, a caustic and revealing exchange took place between JCS Chairman General Lemnitzer and the president.  When Kennedy asked for the justification for sending U.S. combat troops to Vietnam, this heated moment took place:
Lemnitzer replied that the world would be divided in the area of Southeast Asia on the sea, in the air and in communications.  He said communist conquest would deal a severe blow to freedom and extend communism to a great portion of the world.  The president asked how he could justify the proposed courses of action in Vietnam while at the same time ignoring Cuba.  General Lemnitzer hastened to add that the JCS feel that even at this point the United States should go into Cuba.[v]
This passage was a dramatic illustration of the degree to which the president had become isolated from the cold warriors demanding full U.S. intervention in Vietnam and Cuba.  It foreshadowed the uncompromising conflict that erupted three months later over Lemnitzer’s proposal for full U.S. military intervention in Cuba.
In the days immediately after Thanksgiving—26-29 November—Kennedy purged the Vietnam hawks in the State Department (see JFK and Vietnam, 2017 edition, Chapter Seven).  At the same time, as I mentioned before, when the president fired DCI Allen Dulles and replaced him with John McCone, he warned the new DCI, “We want to welcome you here and to say that you are now living on the bull’s-eye, and I welcome you to that spot.”[vi]
The lesson from the president’s climactic Vietnam decision was this: Kennedy turned down combat troops, not when the decision was clouded by ambiguities and contradictions in the reports from the battlefield, but when the battle was unequivocally desperate, when all concerned agreed that Vietnam’s fate hung in the balance, and when his principal advisors told him that vital U.S. interests in the region and the world were at stake.
But the chiefs in the Pentagon remained frustrated with the president’s decision.  Air Force Chief of Staff General LeMay was particularly dismayed.  He later claimed that none of the Joint Chiefs at the time believed the president’s Vietnam program was “anything except some diplomatic fiddling around” with a little more aid.[vii]  On 13 January 1962, General Lemnitzer authored his most strongly worded warning yet that his recommendation to send U.S. military combat forces to Vietnam had to be considered again, and asked Defense Secretary McNamara to send it on to the president.[viii]  McNamara did this, along with his own comment that he did not endorse it.[ix]
In an emphatic and foreboding lecture to the president, Lemnitzer said that failure to heed his recommendation would lead to “communist domination of all of the Southeast Asian mainland.”  Singapore and Malaysia would be lost as the Indonesian archipelago came under “Soviet domination.”  Control of the eastern access to the Indian Ocean would be lost and India would be “outflanked.”  Australia and New Zealand would be threatened, and the American bases in the Philippines and Japan would be lost.
Given Kennedy’s repeated refusals to intervene in Vietnam, Lemnitzer’s memo bordered on insubordination.  His the-sky-is-falling memorandum rebuked the president for his “failure” to send in U.S. combat troops.  Lemnitzer added impudently that this “will merely extend the date when such action must be taken and will make our ultimate task proportionately more difficult.”  The message to Kennedy was clear: We told you a year ago to send combat troops, but you didn’t listen.  If you fail to listen when your program falls apart, we’ll do it anyway.
And, as we know from the subsequent history of events, they did do it anyway.

Posted by William Kelly at 1:11 PM