John Newman's "Into the Storm"

John Newman’s “Into the Storm” 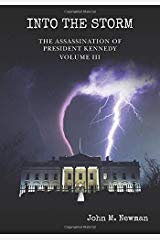 There are two ways to approach the assassination of President Kennedy – either from the ground up, which always ends up chasing Ozzie the Rabbit around, or the top down, evaluating the victim and those around him who wanted him dead. While most conspiracy theorists and all those who believe one man alone killed the President follow the former, John Newman’s approach is a formal and detailed counter-intelligence operation - the correct one that will eventually lead to a resolution of the crime.

“Into the Storm” – Volume three of John Newman’s multi-volume study of the Assassination of President Kennedy, is meticulously written and well documented, so there’s no arguing with Newman over the facts or his logic and reasoning, well developed from his years as an Army intelligence officer and college professor.

While I had read and was impressed with his previous works, I was a little lax in reading Volume 2 of this series “Countdown to Darkness,” so it was with a little embarrassment when I wrote around to a small circle of researchers asking the identity of some codes and crypts and was told to just read Volume 2, where all of the answers to my questions could be found, and they were.

So I had to jump into Volume 3 right away, and found “Into the Storm,” like the earlier works, so detailed that I could only read one chapter at a time, and have to take a break to digest it all. Just as the books are built on the foundations he constructs, every word, sentence, paragraph, chapter and volume is built upon what was previously written, so you have to pay attention and follow this analysis of the Great Game as it progresses.

As I had heard Newman’s presentation on Sam Halpern and RFK in Dallas last November, and was familiar with his work on Antonio Veciana, I looked forward to reading those chapters the most, but found his other chapters fascinating.

But specially interesting is Newman’s clear demonstration of how a calculated shift in the black vote gave the 1960 election to JFK. Newman shows how this emphatic shift came about because of six incidents, each of which had to occur and happen in the sequence in which they did, otherwise JFK would not have won the black vote, or the election or have been in a position to be assassinated a few years later.

The strategic shift in the black vote came after Martin Luther King, Jr.  had been arrested at an Atlanta sit in, then was railroaded by the police when they discovered an old traffic ticket and had King sent to a state prison and sentenced to serve on a chain gang with murderers. JFK, on the campaign trail, at the urging of Sergeant Shriver and the late Harris Wofford, made an impromptu phone call to King’s wife Coretta Scott King, while RFK called the Georgia authorities to arrange for King’s release.

Although the Kennedy’s efforts on King’s behalf did not end in an endorsement, King’s father shifted his support from Nixon to JFK, and the black communities throughout the country knew this. And Shriver and Wofford made sure they knew it by printing thousands of blue leaflets that were distributed to black Baptist churches on the Sunday before the election, a leaflet Newman refers to as “the blue bomb.”

It is hard to believe that over fifty years after the murder of King we are still learning new things about him.

Although the chapter on the reasons for the swing in the black vote is fascinating, and new to me, the other chapters are important too – especially in building a solid foundation for Newman’s basic hypothesis – that he lays out at the beginning of each volume, hypothesis similar to my own.

“Hypothesis One: At some point in 1962, regardless of how much earlier one might have wanted President Kennedy to be assassinated, the contours of the plot that eventually emerged began to fall into place: an American Marxist, Lee Harvey Oswald would appear to have assassinated JFK and to have done so for Fidel Castro with the assistance of the KGB.”

“Hypothesis Two: The plot was designed to make it appear that the Kennedy brothers’ plan to overthrow Castro had been successfully turned by Fidel, resulting in the assassination of President Kennedy.”

“Hypothesis Three: Lee Harvey Oswald was sent by his agent handler to New Orleans in the summer of 1963 to build upon his pro-Castro Cuban legend that he had begun to establish in Dallas at the beginning of that year.”

“Hypothesis Four: Oswald’s CIA files were manipulated by CIA counterintelligence in the weeks before the assassination to support the design mentioned in Hypothesis One and Two. In this connection, Oswald (or an imposter) traveled to Mexico City (28 September – 3 October 1963) and spent time in the Cuban Consulate and met with a Soviet diplomat, Valery Kostikov, who was known by U.S. intelligence to be the head of the KGB assassination (Department 13) for the Western Hemisphere.”

“Hypothesis Five:  An essential element of the plot was a psychological operation to raise the specter of WWIII and the death of forty million Americans. This threat of a nuclear holocaust was then used by President Johnson to terrify Chief Justice Earl Warren – and some of the other men who served on the Warren Commission – to such an extent that they believed there was no alternative to writing a report stating that Lee Harvey Oswald, acting alone, had assassinated the president.”

The Dealey Plaza Covert Intelligence Operation was carried out by well trained and compensated covert intelligence agents, operators and assets who had done such black wet ops before, and did them after November 22, 1963, events that I refer to as related covert ops, most of which had something to do with Cuba, specifically the Bay of Pigs, Northwoods, the Cuban Missile Crisis, Operation Mongoose and JMWAVE maritime operations.

My final hypothesis is that the specific covert intelligence operational plan that was utilized at Dealey Plaza was originally designed by the German military command to kill Hitler, the same plan “studied in detail” by the CIA and used as a contingency plan to kill Fidel Castro, an assassination that was to be blamed on a communist set up as a patsy.

Rather than a bomb, as the German Valkyrie plot failed to kill Hitler on July 20, 1944, a more certain plan was adopted called Pathfinder – which called for Castro to be shot in the head with a high powered rifle as he rode by in an open jeep – the plan that was re-directed to kill JFK in Dallas.

The five aspects of the Valkyrie plan to kill Hitler that were adopted to be used against Castro, and redirected to JFK in Dallas were the use of standard covert intelligence operational techniques, getting the victim to sign off and approve the plan, using the Home Guard (Army Reserves) as “boots on the ground” to carry out the operation, control of the communications and media and blaming the act on a communist.

As for the use of the Home Guard/Army Reserves, rather than the CIA, that was the case with Antonio Veciana, as Newman clearly demonstrates. Newman focuses on Antonio Veciana, the anti-Castro Cuban terrorists who claims he was recruited into the CIA by David Atlee Phillips (aka Maurice Bishop). But Newman takes what Veciana told Congressional investigator Gaeton Fonzi and a few journalists (Dick Russell and Anthony Summers), and writes in his book, and compares it to what’s in the government’s files released under the JFK Act. And vola! We find out that Veciana and his Alpha 66 gang were not run by the CIA but by Army Intelligence – specifically the ubiquitous Assistant Chief of Staff for Intelligence (ACSI).

To the collection of Colonels at Dealey Plaza Newman adds a few more – Colonel J.E. Boyt, who approved operational use of Veciana and Alpha 66 and Colonel Jeff W. Boucher, chief of the ACSI’s Collection Division.

Veciana is a major player in this drama but Newman shows that these guys - trained psychological warriors can’t be taken at their own word, but their stories must jive with the facts we know from the documentary records.

Then there’s the RFK-Sam Halpern nexus over the CIA-Mafia plots to kill Castro.

While Colonel Von Staufenberg got Hitler to sign off on the Valkyrie plot by lying to him, both JFK and RFK refused to approve the CIA plans to assassinate Castro, as the Pathfinder plan was “disapproved by higher authority,” so Halpern and the others in Task Force W and JMWAVE had to lie about that.

Where Newman’s research crosses paths with my own, besides our mutual hypothesis, is with one Charles Ford.

Ford was originally from Atlantic City and was attending Princeton when World War II broke out and he enlisted in the Office of Strategic Services (OSS). After the war Ford began work for the CIA, primarily in the office of Training, frequently at the Agency’s “Farm” at Quantico, Virginia.

Ford worked exclusively in the office of Training except for one eventful year at Task Force W – the Cuban operations desk in the basement of the CIA’s headquarters in Langley, Virginia. There Ford worked closely with William Harvey, Desmond FitzGerald and the executive officer Sam Halpern, who described Ford’s job to Sy Hersh for his book, ‘The Darkside of Camelot.”

Halpern said Ford was assigned to run special tasks for the attorney general Robert F. Kennedy, one of which included visiting the mobsters – Sam Giancana, Santo Traficante and John Rosselli, who were entwined in the CIA-Mafia plots to kill Castro.

While Hersh bought and retold Halpern’s tales verbatim, Newman documents them in a chronological timeline, as he did with MLK and the black votes and Anthony Veciana, and clearly shows that Halpern lied when he tried to say RFK was behind the Castro assassination plots, and the files released under the JFK Act prove this, especially Charles Ford’s own testimony.

Ford testified before the Church Committee twice, though the transcript for one testimony is missing, as are many other Church Committee records, something that the Congressional Oversight Committee should look into if they ever get around to holding hearings.

Ford told the Church Committee that at no time did he ever meet with mobsters at the urging of RFK, though he did work closely with Halpern, Harvey and FitzGerald for that one “operational” year.

Othewise he was assigned to the Office of Training, where he was given custody of an early copy of the Zapruder Film – given to the CIA by the Secret Service “for training purposes.”

Unlike Ford, Halpern was never in the same room with RFK, never met him, yet he tried to falsely pin the Castro tail on RFK by claiming he was behind the CIA’s assassination plots.

Because the part of the plan to blame the Castro assassination plots on the Kennedys failed, it is the very aspect of the plan that gives us insight into the mechanism at work, and who was behind it.

At the time of the assassination Halpern was having lunch with Desmond FitzGerald at an historic Georgetown club when they were informed of the assassination. While walking out, Halpern quotes FitzGerald as wondering aloud if his Cubans were involved – the Pathfinders, who were paid and trained to kill Castro with a high powered rifle as he rode in an open jeep, but instead, turned their sights on JFK in Dallas.

Now we have digested Volume 1 “Where Angels Tread Lightly,” - Volume 2 “Countdown To Darkness” and Volume 3 “Into the Storm,” – and we aren’t even in Texas yet. But the tempest is brewing, we are under full sale, and with John Newman at the helm, we are confident of navigating through these treacherous waters in good hands.

To order any of these books:
https://www.amazon.com/John-M.-Newman/e/B001IZT9DK

Posted by William Kelly at 9:55 AM