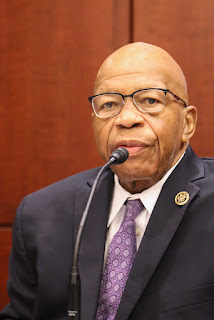 I thought that holding a Congressional Briefing on the JFK Act  (44USC2107) - one that we would control, would convince the chairman of the House Oversight Committee to do his job and hold JFK oversight hearings to answer many outstanding questions. I thought such a briefing and hearings would be the easiest of the legal venues we are pursuing. Boy was I wrong.

With the recent deaths of Rep. Elijah Cummings and former congressman John Conyers, the possibility of a JFK Act oversight hearing and legal enforcement of the law has practically dissolved and could be considered a dead issue.

Instead we are having a mock Texas Court of Inquiry in Dallas on Friday, November 22, 2019, while the Congressional Briefing on the JFK Act is put on hold, and JFK Act oversight hearings are shelved, possibly forever, or at least the foreseeable future.

When the Democrats took control of the House in the last election, elevating Cummings to the chairman of the House Oversight Committee, I thought that we had a really good chance of convincing him to schedule oversight hearings not only because they are necessary, and haven’t been held in over twenty years, but because only one person in the world can schedule such a hearing – the committee chairman, and I thought Cummings was one man we could convince to hold them.

Professor John Newman had worked with Cummings before on another issue and knew him personally, we had constituents who lived in Cummings district who were willing to meet with him as he met with constituents for a few hours every week, and a half dozen of our heavy hitters were willing to sit down with him for a half hour to convince Cummings of the necessity for the oversight and the hearings.

My heart sunk however, when Kathleen Kennedy Townsend was taken aback when asked if she would talk to Cummings, who she knew, about holding such hearings on the JFK Act, and every JFK Act advocate who lived in DC said that the climate in the swamp was focused on Trump and Congress would do nothing.

My heart sunk even further when I learned that Rep. Cummings appeared at a National Press Club event in a wheel chair, not a healthy sign, but I was surprised at his death – as he was not that old, a year older than myself.

And I don’t know how much time I have left, but I am going to continue to pursue this even though I think Cummings was our last good chance at having Congress hold serious JFK Act oversight hearings.

Then, shortly after the death of Cummings and the testimonials to him on Capitol Hill, former Rep. John Conyers (D. Mich.) also died, and put the nail in the coffin of holding JFK Act hearings in Congress. Conyers was a leading member of the House Select Committee on Assassinations (HSCA), and one of the few Congressmen who bothered to listen to us when we lobbied for the release of the HSCA records, that were sealed for 50 years as Congressional records are.

When he dissolved the HSCA, the second chief counsel G. Robert Blakey said, “I will rest on the judgement of the historians in fifty years,” a statement that made my blood boil and began my commitment to release those records. Of course Congress exempted itself when it passed the Freedom of Information Act (FOIA), requiring all branches of government to respond to requests for records, except itself.

So throughout the 1980s John Judge, myself, and a small team of dedicated researchers met at Union Station in Washington D.C. for breakfast, then divided into teams of two and targeted dozens of Congressman, asking them to release the HSCA records, and John Conyers was one of the few to let us in, sit down with him and listen.

But nothing happened for years – until early 1990s when word got out about Oliver Stone’s film “JFK,” and the media was in an uproar over the film.

When Stone was in DC for a visit John Judge and I visited him at his hotel room and told him about our Committee for an Open Archives (COA), the new group we were forming that became COPA – Coalition on Political Assassinations, and our efforts to free the sealed HSCA records. Stone said we could ask him for anything but money, as it was all tied up in his movie. When we asked him about putting a trailer at the end of the film mentioning the still sealed JFK assassination records, he said someone else had already suggested that to him and he would consider it. And that he did, and it worked beyond all anticipation.

So many people – citizens – complained to their representatives in Congress about the sealed JFK records, that Congress decided it had to do something – and a group of lawyers, including Mr. Blakey, wrote the JFK Act that not only required the release of the HSCA records we sought, but ALL government records on the assassination from every agency and department of government, going WAY beyond what we asked for.

The law was unanimously passed by Congress – when does Congress ever do anything unanimously? And was signed by then President George H. W. Bush – one of the last things he did as President. But before he signed the law Bush added a rider that put a twist to the law that required all of the government records on the assassination be released by October 26, 2017, twenty-five years after Bush signed the bill into law. Bush’s rider gave the President of the United States the power to continue withholding records beyond that date – and only the President – whoever he or she may be.

Well as we know that turned out to be Donald Trump, an enemy of the Swamp and Deep State who repeatedly tweeted that he would release all of the records on the assassination, up to the day the records were to be released, when the CIA and his former chief of staff Gen. John Kelly (USMC), convinced him to continue to withhold many thousands of records for reasons of national security.

Two weeks before that decision was made, the Archivist of the United States, an advocate of open records, gave the president his recommendations, a report that remains secret over two years later.

The most prudent thing to do is to convince Congress to hold JFK Act oversight hearings, to obtain the AOTUS recommendations, determine why the law is being breached, why there are so many missing and destroyed records, and exactly how many records are still being withheld – a number the NARA doesn’t even know. That would be the prudent thing to do, especially since there hasn’t been an oversight hearing in over twenty years and such a hearing could convince Congress to reconvene the Assassination Records Review Board (ARRB) to ensure the law is upheld. That's what attorney Mark Adamczyk suggests in his recent article at K&K.

Kennedys And King - JFK Records Release: Why the Redactions?

But with the death of Cummings, the vice chair of the House Oversight Committee – freshman Congresswomen Katie Hill, would have risen to the chair. But she not only knows nothing about these things, she admitted to having affairs with two staff workers – a male and female, while engaged in a messy divorce from her husband. The House Ethics committee began an investigation and she recently resigned.

Now, the senior Democratic on the Oversight Committee – Rep. Carolyn Maloney is the new chairwomen. From a New York district that includes much of Manhattan, Maloney may be the one – the one to schedule JFK Act oversight hearings and answer the outstanding questions. But don’t hold your breath.

While I thought it would be rather easy having a JFK Act Congressional Briefing and convincing the House Oversight Committee chairman to hold JFK Act oversight hearings, as required by the law, that doesn’t seem likely at this point in time.

We will be holding a meeting of the minds on this subject at the CAPA conference in Dallas Nov. 22-23, when a number of JFK assassination record archivists will hold an important panel discussion on the issues associated with the records.

Those scheduled to appear include Britney Crawford - Acting Director of the JFK Collection at NARA, John Slate - Head Archivist for the City of Dallas, Mary Goolsby - Archivist at the Poague Library at Baylor University, and Stephen Fagin - Curator of the Sixth Floor Museum. Rex Bradford, Jim Lesar and others will be consulted.

What we really need however, is another media spark – like Oliver Stone’s “JFK” movie trailer – a spark that will ignite the nation once again to call for the legal enforcement of the JFK Act, get the required JFK Act oversight hearings, answer the outstanding questions, and release the remaining records that were supposed to be released two years ago by law, a law that is now being ignored.

We need to give the JFK Act CPR and breath new life into a law that must otherwise be considered dead.

Posted by William Kelly at 9:04 AM