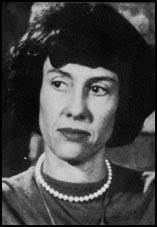 Ruth Paine, her station wagon and the garage where the rifle was kept.

Later tonight (Tuesday  nov.19) Ruth H. Paine will be making a presentation at the Sixth Floor Museum in Dallas. If I were there these are the questions I would ask her, as she apparently is open to such questions and seems sincere in her response. She is featured in a new documentary film "Truth is our only Client" and will be the subject of another documentary devoted just to her.

1)      When you had a Russian Pen-Pal – what was their name, how long did you keep up correspondence and did you ever meet them?

3)      Is your brother still living in Yellow Springs, Ohio, the home of Antioch?

4)      When you met Michael Paine in Philadelphia was he living with his mother at the time?

5)      When did you meet Michael’s mother – Ruth Forbes Paine Young, and what did you think of her?

6)      When you married Michael at the Quaker meeting in Media, did you know that it was the Media FBI office that was burglarized by anti-war radicals who stole and published the COINTELPRO documents? Did you know any of the perpetrators, some of whom were Quakers?

7)      Michael’s mother Ruth Forbes Paine Young had been married to Lyman Paine, a founder of the Trotskyie Communist Party in the USA – did you ever meet him or discuss him with Michael?

8)      Michael’s mother then married Arthur Young, the eccentric inventor of the Bell Helicopter. What was your opinion of him and how he arranged for Michael to work at the Bell plant in Texas?

10)  The Forbes family, of which Michael’s mother was a part, own Naushon Island off Massachusetts, where you apparently have visited. Can you describe it and did you ever meet other visitors like Mary Bancroft and Walter Cronkite?

11)  At the house party where you met Marina Oswald, did you know that while you were talking with Marina Lee was talking at length to Volkmar Schmidt, who discussed the  July 20, 1944 attempt to kill Hitler and suggested that General Walker should be killed as Hitler should have been?

12)  While Michael testified he too didn’t know Osawld had a rifle, and thought the gun in the blanket was camping equipment that he moved around, he later said that he did see the backyard photo of Oswald with the rifle and pistol, and two communist publications including the Militant – the news of the Trotksyite party. Do you know if Michael and Lee ever discussed the Trotkysite party that Michael’s father and Oswald were involved with?

13)  Did you know that Oswald gave George deMohrenschildt a copy of the backyard photo that Marina had inscribed “Hunter of Fascits – Ha, Ha”?

14)  When you drove Marina and the Oswald’s belongings to New Orleans, you didn’t know you were transporting the rifle as well. When you asked Marina to move in with you in Texas until she had the baby, you asked her to write her response in a letter to be sent to her in care of Arthur Young. She must have done so because when you left the Youngs in Philadelphia you drove to New Orleans and picked up Marina and the rifle. Did you mention Marina moviong in with you to the Youngs?

15)  Oswald had four notations of Russian organizations in Philadelphia. Since you lived there, were you the one who supplied those address to Oswald, and did he ever mention moving to Philadelphia to find work?

16)  A few weeks before the assassination you wrote a letter to your father mentioning that Oswald was a good and loving father. And Oswald once broke up a fight among kids on your front lawn telling them violence never settled anything. How do you fit these facts with Oswald being the assassin of the President?

17)  Shortly after the assassination a police report of a wiretap at Bell Helicopter quoted two people talking, a man and a women who said that they knew Oswald didn’t kill the President and knew who was responsible. Was that you and Michael talking, and if not what was that all about?  And did Michael ever mention Walter Dornberger, who worked in security at Bell Helicopter?

18)  After such a close relationship, why didn’t you and Marina ever talk again after the assassination? There is a report you did meet once, if so when was that and what were the circumstances?

19)  You often mention the letter Oswald wrote to Marina and left in a book you passed on to Marina through the Dallas Police. The letter, photos of Walker’s house, the notebook he kept and later destroyed and the story of Oswald returning home without the rifle and telling Marina he took a shot a Walker all seem to indicate the April 10, 1963 Walker shooting was a well planned act. Why wasn’t the assassination of the President also planned in advance with such preparation?

20)  If Oswald killed the President alone, without any assistance, as you ostensibly believe, why is he degraded as a wife beating loser who couldn’t hold a job instead of being the world’s greatest assassin, as he would be if he had done the deed all by himself?

And as Columbo would have done - Oh, yea, I have one more question Mrs. Paine, - When you were in Nicaragua in the 80s working for the Quakers with the Sandinistas, you were accompanied on occasion with a gentleman from Antioch College - who was he? And who were you working for and reporting to?

NOTE: I will be heading to Dallas this week and am woefully underfunded. My plane fair is paid but I need some additional support to pay for my Hotel Room, as the CAPA Board members decided that we would each pay our own way.

Please support JFKCountercoup if you can:


https://www.gofundme.com/f/supportjfkcountercoup
Posted by William Kelly at 9:31 AM

Have you thought of writing to her? I read an article that stated she lives at a Friend retirement village. Friend House 684 Benicia Drive Santa Ross,Ca. 95409 It didn't state her address but it might reach her.