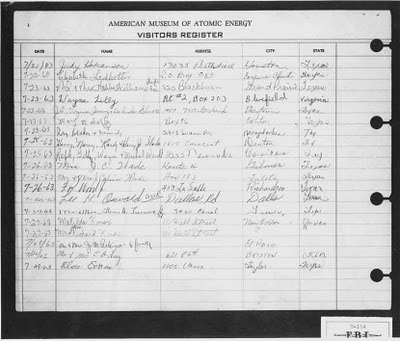 Lee H. Oswald's signiture is written on the guest register at the American Museum of Atomic Energy in Tennessee on July 26, 1963.

"USSR" is also written in, just to make sure that we know it's the right Oswald.

July 26, 1963. - Speaking on television from the Oval Office about the Limited Test-Ban Treaty, JFK refers to "the worlds of communism and free choice," caught up for eighteen years in a "vicious circle of conflicting ideology and interest...Yesterday a shaft of light cut into the darkness." He goes on to say that the treaty was the product of "patience and vigilance. We have made clear, most recently in Berlin and Cuba, our deep resolve to protect our security and our freedom against any form of aggression...This treaty is not the millennium...But it is an important first step, a step towards peace, a step towards reason, a step away from war...." JFK then flies to Hyannis Port, where Averell Harriman arrives on Sunday with a great jar of caviar from Khrushchev.

There is the salient point regarding the Oswald signature, and seemingly a simple question. Did Oswald sign it, or did someone else sign his signature to perhaps sow confusion, regarding Oswald's timeline? With regard to the issue, I would certainly not rule out his being there, but if he wasn't there and his signature was simply written in, the facts as presented as above, show that there was someone who could be a person of interest, or simply has some insight into the whole affair.

Mr. WOOD was displayed a copy of the visitors’ register, American Museum of Atomic Energy, and immediately identified his signature and address on this register under the date of July 26, 1963. It was pointed out to Mr. WOOD that on the line immediately below his signature and under the date of July 26, 1963, there appeared the name LEE H. OSWALD. Mr. WOOD stated he did not observe the person placing this name on the visitors’ register after he had signed it on July 26, 1963.

Mr. WOOD explained that he had been granted a scholarship to attend a summer workshop for administrators on higher education for adults at the University of Tennessee, Knoxville, Tennessee. He visited the American Museum of Atomic Energy as part of the seminar course attended at the University of Tennessee. He stated that on July 26, 1963, a Friday, he attended class until 11:30 AM and thereafter, with several other students, proceeded to Oak Ridge, Tennessee, to visit the American Museum of Atomic Energy. He stated he remembers the group waited for approximately 30 minutes for a new tour to commence. During this period of time, between 1:15 PM and 1:45 PM, he signed the visitors’ register.

Mr. WOOD stated that he had observed LEE HARVEY OSWALD on several television broadcasts and had seen his picture in numerous newspapers and magazine articles and to the best of his remembrance, he never saw LEE HARVEY OSWALD at the American Museum of Atomic Energy on July 26, 1963.

He further explained that there were several persons waiting in the lounge area of the museum for a new tour to commence and no one conducted themselves in such a manner as to attract attention.

Mr. WOOD was displayed a picture of LEE HARVEY OSWALD, Dallas Police Department No. 5418, taken November 23, 1964 (sic). After viewing this photograph, Mr. WOOD stated it did not refresh his memory and he still does not remember seeing LEE HARVEY OSWALD at the American Museum of Atomic Energy at Oak Ridge, Tennessee.

Oswald's name is in the middle of a string of names with Texas addresses. Peirce Wood said he was part of a class at the U. of Tennessee visiting the museum. Was the class made up of Texans; perhaps some group of Texas administrators all attending the same program? Wood doesn't say that, one would think he would if that were the case.

I'd seen this information before, and it's hard to figure. If someone other than Oswald signed his name, how would that person know about him 4 months before the assassination? Possibly someone with a sense of humor remembered a newspaper article about Oswald the defector and entered this as a joke? If so, that would fall into the "truth is stranger than fiction" category.

Bill, I think it's signed by James A. Hawkins who then took a bus to Mobile where he is arrested that night.