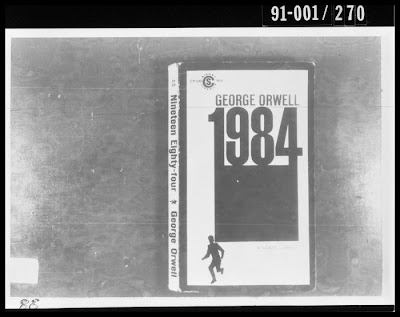 I read the levanthal Piece
[http://www.ctka.net/2010/Levanthal.html]
and now that the page has been suspended maybe he is writing part 2 as we speak informing us how to deal with part 1 The disinformation. I personally find it strange that a government would have such a department and also inform us it has such a department. What would Winston Smith have made of this?

For some reason they were nicknamed Memory Holes. When one knew that any document was due for destruction, or even when one saw a scrap of paper lying about, it was an automatic action to lift the flap of the nearest memory hole and drop it in, whereupon it would be whirled away on a current of warm air to the enormous furnaces which were hidden somehwere in the recesses of the building.....with a movment which was as nearly as possible unconscious, he crumpled up the original message and any notes that he himself had made, and dropped them into the memory hole to the flames. What happened in the unseen labryinth to which the pneumatic tubes led, he did not know in detail, but he did know in general terms. As soon as allthe corrections which happened to be necessary in any particular number of the TImes had been assembeled and collated, that number could be reprinted, the original copy destroyed, and the corrected copy placed in the files in its stead. This process of continuous alteration was applied not only to newspapers, but to every kind of literature or documentation which might conceivable hold any political or ideological significance.

It struck me as curious that you could create dead men but not living ones...and when once the act of forgery was forgotten, he sould exist just as authenticaly, and upon the same evidence, as Charlemagne or Julius Caesar....What most afficted him with the sense of nightmare was that he had never fully understood why the huge imposture was undertaken. The immediate advantages of falsifying the past were obvious, but the ultimate motive was mysterious.

At one time it had been a sign of madness to believe that the past is unalberable. He might be alone in holding that belief...but the thought of being a lunatic did not greatly trouble him; the horror was that he might also be wrong.

In response to a HSCA request for the accused assassin's military file, The Department of Defense replied:

1. Dossier AB 652876 Oswald, Lee Harvey, was identified for deletion from IRR (Intelligence Recordes and Reports) holdings on Julian date 73060 (1 Mrach 1973) as stamped on the microfilmed dossier cover. It was not possible to determine the actual date when physical destruction was acomplished, but is credibly surmised that the destruction ws accomplished within a period not greater than 60 days following the identification for deletion....

2. It was not possible to determine who accomplished the actual physcial desctrution of the dossier...

3. The exact material contained in the dossier cannot be determined at this time.

4. ...It was not until 1975 that the archivist changed the criteria to ensure non-destruction of investigative records that may be of historical value.....
Posted by William Kelly at 5:58 AM

I should have read this before spending all those years listening to Pink Floyd's "Animals." Would have made for a much richer experience.
website for Alaska Halibut Fishing Guides