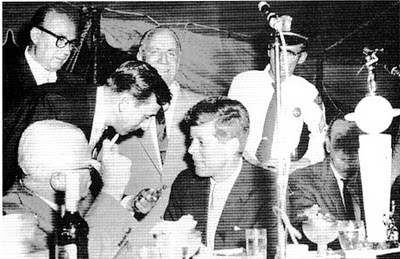 It was during the crucial and pivitol West Virginia primary when, according to Mob Legend, Skinny and Malandra took suitcases of cash to distribute to the local West Virginia sheriffs, whose annual convention in Atlantic City brought them to Skinny's 500 Club.

Skinny then became the manager of the Cal-Neva Lounge on the California-Nevada border when his Pal Frank Sinatra and Frank's partner Sam Giancana owned it. Before Skinny, Frank and Sam took over, part of the Cal-Neva was said to have been owned by JFK's father Joe Kennedy, who knew Giancana from their bootlegging days.
Posted by William Kelly at 9:57 AM