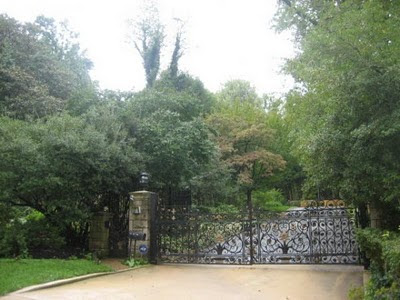 - ...land.
- Air Force One. Air Force One, this is Crown, come in.
- Request Victoria … repeat … cance l … for commercial telephones. That is Volunteer and Victoria’s commercial telephones at Valley should be temporarily discontinued and security lines should be put in ,… get ……land…. personnel on that…..do you understand? Over.
- That’s a Roger, Roger, cancel commercial lines at Valley, at Valley, and install blocker circuits, blocker circuits. Is that a Roger?
- That’s a Roger.
- Roger. Will do.
(13:13)

Lyndon B. Johnson was now the President of the United States, but the White House was still the residence of the Kennedy family. Johnson would meet with his staff there as soon as he arrived, but he couldn’t stay the night in the mansion. It wouldn’t be right. Johnson had decided he would stay at his home the Elms until Mrs. Kennedy had time to move out, but this created yet another urgent and unprecedented situation for the Secret Service.

The Elms was located in an upscale neighborhood called Spring Valley, in northwest Washington, D.C., and due to the unusual circumstances, it required an immediate upgrade in security.

Lee Harvey Oswald was in custody in Dallas, but even if he was the man who’d killed President Kennedy, there was still the very real possibility that he was part of a bigger conspiracy to eliminate other government leaders.

Paul Rundle, the agent who’d come from the Denver office prior to Blaine and Hill, was put in charge of securing Johnson’s residence. There would be three perimeters of security. The first, outer layer would be manned by the D.C. metropolitan police, the second perimeter would be manned by the National Guard, and the third and final layer of protection would be the Secret Service agents from the presidential and vice presidential details, supplemented by agents from nearby field offices...

...At 9:25 P.M. the afternoon shift traveled with President Johnson to the Elms at 4040fifty-second Street, just five minutes from the White House, where Agent Paul Rundle was waiting to brief them on the new security.

“Listen,” Rundle said, “There are rumors flying all over the place but the truth is, nobody knows who might have been behind the assassination. They’ve got this guy Oswald in custody in Dallas, and while he could just be a deranged sociopath, there’s still the chance that he as part of a bigger conspiracy. Could be Cuban, Mafia, or some Soviet-backed plan to overthrow the government. It’s just too early to know, but the orders we’ve been given are to be excessive in our protective measures.”

None of these Kennedy Detail agents had ever been to Johnson’s residence before, so Rundle gave them a quick tour. Every half hour the agents would rotate posts in a counter-clockwise direction, just as they did at the White House – with one major difference. Tonight, along with the .38 caliber revolver each agent always carried, every security post would be armed with a Thompson submachine gun...

Standing outside in the pitch-black darkness, Agent Jerry Blaine tried desperately not to yawn. He was on post at the rear corner of President Johnson’s large two-story French chateau-style house close to the back door, and with the exception of the forty-five minute nap in Austin and some catnaps on flights, it had now been nearly sixty hours since he’d had any sleep. Blaine was almost to the point where he was hallucinating.

When he’s taken over from Any Berger just before midnight, the two simply looked at each other without saying anything. What could be said?

Blaine had been at this particular post for about fifteen minutes when he suddenly heard the sound of someone approaching from the clockwise direction. It wasn’t rotation time, and he knew a Kennedy Detail agent would never approach from that direction.

Instinctively Blaine picked up the Thompson submachine gun and activated the bolt on top. The unmistakable sound was similar to racking a shotgun. He firmly pushed the stock into his shoulder, ready to fire. He’d expected the footsteps to retreat with the loud sound of the gun activated on the trigger. Let me see your face, you bastard.

The next instant, there was a face to go with the footsteps.

The new President of the United States, Lyndon Baines Johnson, had just rounded the corner. In the blackness of the night, Johnson’s face went completely white.

A split second later, Blaine would have pulled the trigger.

President Johnson looked at Blaine, said nothing, and turned around and went back in the house.

Jesus Christ! I almost shot the new president. What the hell was he coming around the wrong way for?

With all these new security measures put into place that night, in the chaos nobody had thought to inform President Johnson about the standard counterclockwise movement protocol.

Blaine struggled to regain his composure as the reality of what had just happened washed over him. Fourteen hours after losing a president, the nation had come chilling close to losing another one.
Posted by William Kelly at 2:07 AM

Labels: LBJ Back at the Elms