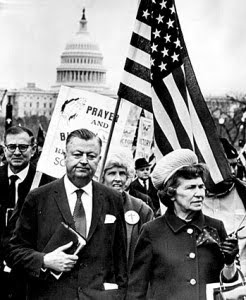 President Kennedy Was To Been Heckled In Philadelphia By Walker

The coincidence of the two speeches was no accident. Gen. Walker’s speech, later canceled, was deliberately planned by the so-called Rev. Carl McIntire as part of the hate campaign which he and other extremists have waged against the late President and which made it increasingly difficult for Kennedy to put his program through Congress. It may also have contributed to the atmosphere of hate and suspicion in Dallas.

Aligned with Rev. McIntire and Gen. Walker have been such other individuals and organizations as Dan Smoot of Dallas, Rev. Billy James Hargis of Tulsa, and the National Indignation Committee whose leader, Frank McGehee, insulted Adlai Stevenson in Dallas.

The National Council of Churches before which President Kennedy was scheduled to speak includes all the leading Protestant churches of the United States and stands for the Kennedy policy of better understanding with the rest of the world. Five Catholic observers are attending the Philadelphia conference. The council also advocates coexistence, technical assistance to the underdeveloped countries, collective bargaining in labor relations, reduction of armament by international agreement, and the propagation of Christian responsibility in Africa.

The contrast between the council which sponsored Kennedy and the organization which planned to attack Kennedy is vivid in the extreme.

Rev. McIntire was defrocked by the Presbyterian church and thereafter he set up the so-called “American Council of Christian Churches,” a name which has confused many people.

McIntire, through either his sermons or his literature, has charged that “The Catholic Church is the harlot church and the bride of the anti-Christ”; that the National Council of Churches is “apostate, Communist, and modernist,” “the strongest ally of Russia,”; that Brotherhood Week sponsored by the National Council of Christians and Jews is “a gross perversion of Christian teachings.” McIntire has questioned the loyalty of John Foster Dulles, claims that the United Nations is bankrupt morally, and has joined Sen. Barry Goldwater in advocating the abolition of the income tax.

His weekly publication, “The Christian Beacon,” described Roman Catholicism as “the great enemy of freedom and liberty that the world has had to face today….One would be much better off in a Communist society than in the Roman Catholic Fascist setup.”

But most of all, Rev. McIntire and his stable of propagandists have been against Kennedy’s policy of coexistence. The McIntire literature and radio broadcasts made it appear that the late President was about to sell out the United States to Moscow.
Most interesting fact about propagandist McIntire is the manner in which he gets privileges from the same federal government which he attacks. First is his weekly magazine, The Christian Beacon, which gets second class mailing privileges and can mail its copies at the rate of 1.6 cents per pound.

Second, McIntire conducts his services largely over the airways owned by all the people under a fairly recent FCC decree urging more controversy and discussion on radio and TV. In Theory this is an excellent decree. But in practice it has been taken advantage of by some of the hate groups: while the church organizations and civic groups which preach better understanding have not shown the same energy in combating these broadcasts.

McIntire’s radio program is called “The 20th Century Reformation Broadcast” and began in 1958 from a single station in Chester, Pa., WVCH. It built rapidly, which in itself shows the tendency of some Americans to fall for suspicion and hate. In May of 1962 McIntire announced, “God has given us 305 stations.” He appealed for more money to support them, and said his ambition was to get 600 stations.

On November 21, 1963, just as he was organizing his rally against Kennedy and the National Council of Christian Churches in Philadelphia, McIntire sent out another appeal for funds.

“My dear friend,” he wrote, “we are in serious financial difficulties. For the last three weeks, for some unexplained reason, our receipts have fallen way down; in fact, almost in half. The November envelops, for some reason, have not come in as usual. It is very serious. We are trying to catch up and now we have come to the limit.

“We are going to have to start dropping stations and this will be a severe blow to us, coming just at the time when the President is to be in Philadelphia.
“Unless I have some real response to this letter, stations are going to stop carrying the program. We are at 533 and we must not start going down.

“Thanksgiving meant so much to these early Pilgrims. I am thankful for all that God has done for us through these months through the broadcast. I believe that God will hear the prayer which accompanies this letter. He knows ‘In God We Trust.’ May he richly bless you, my friend. Gratefully, Carl McIntire.”

A network of 533 radio stations is a lot to carry a broadcast every day which preaches distrust in the President of the United States, plus attacks on other churches. Yet these broadcasts have continued every day for five years. Unquestionably they have had their impact in sowing the seeds of discord, suspicion, and hate.

Thanks to Peter Fokes for calling attention to this story.