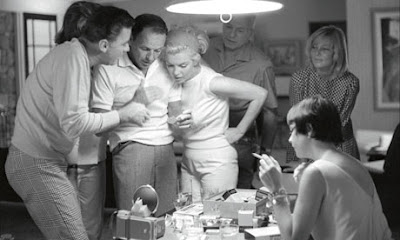 ...One of the president's trips to Palm Springs, California ended up being tabloid fodder.

President Kennedy's sister Pat was married to actor Peter Lawford, who was a member of the infamous Hollywood "Rat Pack." The Rat Pack was basically a group of entertainer friends - Frank Sinatra, Sammy Davis, Jr., Dean Martin, Joey Bishop, and Kennedy's brother-in-law Peter Lawford - who would often show up on stage at each other's Las Vegas gigs, thereby giving the audience and impromptu and usually hilarious performance. Their 1960 movie Ocean's 11, with Angie Dickinson, brought them all together on the big screen. [BK notes: As did their remake of Gunga Din - Sergeants 3].

President Kennedy enjoyed hanging out with the Hollywood set, which was so different from the Washington political crowd, and Palm Springs was exactly the distraction he needed after the Cuban Missile Crisis in December, 1962.

Floyd Boring, Jerry Blaine, and a young agent from Stew Stout's shift named Andy Berger were assigned the advance for the president's trip. Andy Berger was a twenty-six-year old agent who had been plucked from the New York Field Office earlier that year. He was a New Yorker through and through, and while he and his wife, Dolly, had had a tough time adjusting to life in Washington, he loved being on the Kennedy Detail. IT had been a tense few weeks in Washington and the agents were looking forward to the week in sunny Palm Springs.

Shortly before they left Washington, Ken O'Donnell - the president's aide - informed Floyd Boring that the president would be staying at Bing Crosby's home and that the agents would be in charge of securing the property.

Unbeknownst to the Secret Service advance team was the fact that the president's brother-in-law Peter Lawford had been helping with behind-the-scenes arrangements, and had committed to Frank Sinatra that the president could stay at Sinatra's home. In the weeks prior to the president's visit, Sinatra had a state-of-the-art security system installed, along with a helipad on his desert property.

The three-man Secret Service advance team flew to Palm Springs, settled into their hotel, and visited the Crosby residence the next day. Mrs. Crosby gave the agents a tour of the house and they immediately began establishing posts for the coverage of the area. No sooner had the three agents started the survey that Peter Lawford showed up at the house. He had a look of deep concern on his face and wanted to see what he could do about changing the president's quarters from the Crosbys' to the Sinatra residence.

Politically the White House had concerns about rumors of Frank Sinatra's possible connections with organized crime, but rather than risk any fallout, they'd let the Secret Service agents be the designated hit men. Nobody in Washington had bothered to tell Sinatra or Lawford about the change in plans. Floyd Boring explained the situation to Lawford, who was nervous about breaking the news to his buddy Sinatra. Boring offered up Blaine and Berger to go with Mr. Lawford to visit Mr. Sinatra.

When Peter Lawford, Jerry Blaine, and Andy Berger showed up at the Sinatra residence, the agents could detect a heavy cloud descending over the President's brother-in-law as they waited for someone to answer the door. As the more senior of the two agents, Blaine had offered to be the bearer of the bad news. But when Sinatra opened the door, Blaine suddenly felt awkward. He was a huge Sinatra fan, and this was not going to earn him any points with the crooner.

"Come on in," Sinatra said cheerfully.

Blaine was trying to be cool and confident. He knew he had to say something right away.

"Uh...Mr. Sinatra, I'm afraid to inform you that Mr. Bing Crosby's home has been selected for the president's visit this weekend."

Poor Peter Lawford looked dejected and humiliated. "Sorry, Frank," he said. "We got overruled. I just found out myself."

Sinatra was very astute and ultimately understood that the agents were operating on orders that must have originated fairly close to the president. He knew what it was all about.

Andy Berger stepped up to the plate. "It's not his fault, Mr. Sinatra. This was purely a security decision made by the Secret Service."

The minute Andy Berger spoke up, Frank immediately detected his New York accent and asked Andy where he was from. Suddenly the mood switched and Andy and Frank began talking about their New York-New Jersey connection. Before long, Frank Sinatra invited them for a soft drink, and they ended up laughing and talking for about a half hour.

Sinatra was gracious and said he understood. Miraculously, it seemed the problem had disappeared.

By the time the president arrived, everything had smoothed over - nobody wanted to make a big deal over the issue in his presence. Blaine and Berger sensed a rift between Sinatra and Lawford, but when the story was relayed back to the Secret Service supervisors, everybody agreed that had it not been for Andy Berger's New York roots, the situation could have ended up much worse....

...Within five minutes after the president's limousine arrived at the hospital, the police cruiser pulled up with Andy Berger and Dr. Burkley. As Berger and Dr. Burkley rushed inside, another agent directed them to Trauma Room No. 1 Berger's heart pounded as he looked at the hallway floor and realized they were following a trail of blood....

Standing outside the room where the president was being treated, Andy Berger felt devastated. He didn't know where to go or what to do. Since the vice president was adequately guarded, Roy Kellerman told him to protect the lobby area leading to the trauma rooms.

Agents and policeman were everywhere and there was a sense of paranoia throughout the hospital. Andy tried to imagine what could have happened. Who had shot the president? Was it part of a larger plot?

An FBI agent showed up saying he'd received a call from J. Edgar Hoover. He immediately produced his credentials and said, "Hoover wanted me to let you know I'm available."

Andy checked his credentials and recorded his commission book number, then directed him to Roy Kellerman. A representative from the CIA appeared a while later, and again Andy followed the procedure. [BK notes: Who from the CIA was at Parkland Hospital?]

(p. 244)...After a short discussion it was decided that for security reasons Kilduff would not publicly announce President Kennedy's death until Vice President Johnson, who was constitutionally now the President of the United States, had left the hospital....

The various options were discussed and Vice President Johnson finally agreed that he and Mrs. Johnson would go to Air Force One, but they would not allow the plane to leave without Mrs. Kennedy.

Back at the entrance to the lobby outside the trauma rooms, where Agent Andy Berger was on post, a tall man in a gray suit had somehow managed to get past the outer security and was barreling his way into the lobby, nearly knocking over a nurse as he shouted, "I'm FBI!"

The man appeared violent and distraught. Yea, right, you're FBI. Before he could get any farther, Andy knocked him to the ground and held him down.

Sprawled on all fours, and enraged but unable to break free, the man growled, "You're not in charge now! What's your name?"

"My name?" Andy asked incredulously as he pressed hard into the man's chest. "What the hell's your name? If you're FBI show me your goddamned indentification!"

It turned out the man was indeed a Dallas FBI agent, but at this point Andy had no respect for him. Every agent - FBI, CIA, Secret Service - knew the protocol, and this guy had completely ignored it.

Andy let the man go but refused to allow him inside. Finally the FBI agent realized he wasn't getting anywhere and angrily walked towards the exit. Glaring at Andy, he yelled, "J. Edgar Hoover will hear about this!"

(p.366): At the end of August, the Democratic National Convention was held in Atlantic City, New Jersey. Attorney General Robert Kennedy had lobbied to be Lyndon Johnson's vice presidential running mate, but President Johnson was worried that having Kennedy on the ticket would cost him votes in the South. Instead Johnson chose Hubert Humphrey, a U.S. senator from Minnesota. Robert Kennedy was slated to speak at the convention, and there was a great deal of concern that he would cause a disruption. When Jackie Kennedy decided that she too would like to make an appearance to thank the party for all the support they'd given her husband, Clint Hill worked with Nancy Tuckerman and Pamela Turnure, who had been Jackie's press secretary, on the security advance in Atlantic City.

As it turned out, former attorney general Kennedy did not upset the proceedings. When he appeared on stage, he received an uninterrupted standing ovation that lasted nearly twenty minutes, and his heartfelt speech about how much his brother John F. Kennedy had depended on and appreciated the support of the Democratic Part was the highlight of the convention. At the end of the speech he urged the party to offer just as much support to the 1964 candidates, President Lyndon B. Johnson and Hubert Humphrey.


Frank Sinatra's last performance at Skinny D'Amato's 500 Club in Atlantic City was in August, 1964, which should have been the big party renominating John F. Kennedy for his second term in office.
Posted by William Kelly at 2:36 AM