For Some Reason, I Don't Think So

FOR SOME REASON I DON'T THINK SO 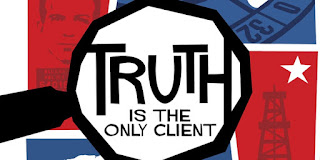 To his research group Paul Hoch called attention to a press release for a new documentary movie: "Truth Is Our Only Client - The Official Investigation of the Murder of John F. Kennedy."

On alt.assassination.JFK, Steve Barber has referred to this new film and is one of the interviewees. The date of the premiere is approximately the 55th anniversary of the release of the Warren Report.

Sep 22, $15 An Evening with Staff Members of The Warren Commission by Ezzie Films and The Sixth Floor Museum at Dealey Plaza

The world premier of the documentary entitled "Truth is the Only Client: The Official Investigation of the Murder of John F. Kennedy".

The story is told from the point of view of the surviving primary investigators of the Kennedy Assassination - The Warren Commission Staff. The film offers exclusive and newly filmed interviews with the Staff Lawyers for The Warren Commission. These lawyers had the responsibilty to investigate the facts and provide their findings to The Commission. There has never been a motion picture focused on their side of the story. It is a unique view into the workings of history and, perhaps, one of the only remaining opportunities for our citizenry to judge for themselves the effectiveness and conclusions of The Warren Report.

The film will serve to separate provable facts from what has become the legend surrounding the assassination, not by debunking and disproving a litany of unfounded theories, but by honestly and frankly examining all that was uncovered by the investigation and what has been learned since.

With the benefit of hindsight, the investigators will reflect on what they may have missed, and to mistakes and miscommunications that may have lead to over a half century of suspicion. The film also features newly filmed and exclusive interviews with:

BK Notes: In response to a question, I will certainly view this film, and write a review of it, as I watch everything and read everything – I even read Bugliosi’s book and learned some new things in “Reclaiming History” that you can’t find anywhere else. For instance the fact that Assistant DA Bill Alexander was going to charge Oswald with “furthering a communist conspiracy,” and was being egged on to do so by reporter Joe Goulden, one of David Phillips’ assets. That was only thwarted by LBJ as when he got wind of it, called Texas authorities to ensure that Oswald was not considered a communist conspirator but a lone nut, beginning the switch from PDS’s Phase One to Phase Two cover stories.

Will the film interview Bugliosi about that? For some reason I don’t think so.

If the film will really try to separate provable facts from what has become legend and honesley and frankly examine all that has been uncovered by the investigation and what has been learned since, then I suspect that we will learn some of the following from some of the “assassination characters”:

Priscilla Johnson McMillan, I hope, will discuss her employer - the North American Newspaper Alliance (NANA) when she interviewed Oswald in Moscow. As detailed in the article "Bottlefed by Oswald's NANA," this news organization was owned by former OSS and British Intelligence officers and run by Ian Fleming, of 007 fame, and was a virtual intelligence network that also include JFK's girl when he was in ONI Ingrid Avid, Ernest Hemmingway, Anthony Veciana and David Philliips' friend Virginia Prewett, and Monica Lowenski's friend Luciana Goldberg. Will PJM talk about NANA and these people affiliated with it?

I don't think so.

Internet promoter Steve Barber is the rock drummer who practically single handedly debunked the Barger, Weiss and Ackensasy HSCA acoustical studies, without bothering to replicate them. I would think the acoustical scientists will be given equal time to either dismiss or confirm their original findings that the acoustics present a 95 percent probability that there were four shots from two different locations.

But for some reason I don’t think they will give equal time to the scientists.

As for the Warren Commission lawyers, I like what WC attorney Sam Stern told the HSCA and wonder if they will include it in this documentary:
http://jfkcountercoup2.blogspot.com/2017/02/hsca-sam-stern-interview-smoking-doc2.html

Sam Stern: "…I am less certain now that at the time we wrote the Report. Less certain that Oswald acted alone…. in my own mind. I just thought there were a lot of straws left.....I have become more skeptical about the Warren Commission findings and everything else that is a part of official life, I suppose. Everything has become discredited over the years since 1963. You don’t really believe in things the way you did back then ….at the outset we realized that there was no possible way to penetrate any official involvement in a cover-up or conspiracy if there was such complicity.”….

The HSCA report continues: “Stern stated that had the Commission learned of the CIA-Mafia conspiracies to assassinate Fidel Castro, ‘we would have gone much more into Cuba, the CIA, and the Mafia. We would have had a whole host of new avenues calling for investigation. And we would have obviously had to develop some new sources of information – other than the agency.’ When shown the CIA memorandum of November 1963 in which a CIA officer wrote that the Agency had once considered using Oswald for intelligence purposes, Stern stated that ‘I have never seen this. I was never given this, and we had asked for and were supposed to be given anything of relevance like this.’ In reading the memo, Stern stated that ‘that would have definitely been relevant. If they (the CIA) were taking him that seriously, then you might think that others could or did also. If we found that had been withheld, that would have been a major explosion also’”

“When shown a copy of the 1960-61 memos regarding ‘the possibility of an Oswald impostor,’ Stern stated that he had never seen those three memos either, despite the fact that ‘they would have certainly been relevant. I was supposed to have been given all relevant Bureau information and files on Oswald in the pre-assassination period. They said I had everything.’”

“Stern stated that if the staff of the Commission had discovered that the Hosty note had existed and had been destroyed by the FBI in Dallas, that ‘if we had found out that happened, we would have gone to a full Commission meeting immediately, and would have made the big decision regarding any future relationship between the Commission and the FBI. It just would have gone to the heart of the whole relationship and the Bureau’s motivation. The destruction of that note would have resulted in the ultimate brouhaha.’”

Yea, "major explosion,” and the “Ultimate Brouhaha,” but for some reason, that never happened, and for some reason I don't think any of this will be included in this film, whose client will be cheated unless it is.

David Robarge’s contribution could be huge, but I don’t suspect the official CIA historian will say much to support truth as his client.  His biography of John McCone is still heavily redacted: https://www.cia.gov/library/readingroom/docs/DOC_0001262720.pdf].

I would like Robarge, as he personally looked into it, to address the question of how the CIA lost all of its records on their “detailed study” of the July 20, 1944 Valkyrie plot to kill Hitler, and the CIA’s adaption of that plan to use against Castro? And also, what became of the CIA’s Pathfinder files that JMWAVE NPIC staff recall reading because they were kept in the NPIC section of the station instead of in the Operational Files where they belonged. So we don’t have it today because it was intentionally misfiled. The only record of the Pathfinder plan to kill Castro with a high powered rifle as he rode in an open jeep – was found - again intentionally misfiled in Frank Sturgis’ Security File. https://www.maryferrell.org/showDoc.html?docId=104139&relPageId=14

But I don't think Robarge ever will publicly address these issues.

As for Ruth Paine, since she wasn’t questioned by the HSCA or the ARRB as she should have been, so I hope she will address her visit to the Forbes Family island off Massachusetts at the invitation of Michael Paine’s mom – Ruth Forbes Paine Young (RFPY). Michael Paine's mom was best friends and traveling companion of Mary Bancroft, as Bancroft recalls in her “Autobiography of a Spy” recounting her relationship with RFPY as well as Allen Dulles during WWII and their involvement in the aforementioned Valkyrie plot to kill Hitler. Will Ruth Paine mention her visit to Michael Paine’s mother shortly before picking up Marina and the rifle in New Orleans and taking them to Texas while Oswald supposedly went to Mexico?

For some reason I don’t think so.

Will we get the ultimate truth from this film?

For some reason I don't think so. But I will give it a shot and try to view it when it is available.

Posted by William Kelly at 7:25 PM