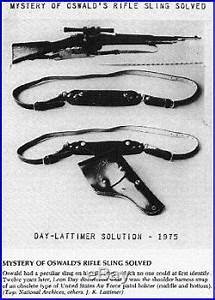 I am going request the National Archives and Records Administration (NARA) to check both the sling and the holster found in Oswald’s room at 1026 N. Beckley to see if there are any manufacturer’s serial numbers that can be associated with any USAF allocations of weapons or accessories, as I know they kept a very strict inventory, so one day we may be able to associate the sling and/or the holster with a particular AF unit, plane or officer to whom it was assigned.

Since the M13 sling did not come from Klines, and was not mass produced and resold as surplus, but with it’s accompanying aluminum .38 revolver pistols that were ordered destroyed by the USAF, only a few have survived, less than 50, most of which are now in museums or were taken home by officers before the destruction notice was given. So a few may have been sold at Thrift shops or garage sales by the widows of Air Force SAC officers who were senior enough to take them home upon retirement before they were ordered destroyed.

It would certainly be a coincidence if Oswald purchased such a sling at a garage sale or Thrift shop, and more than likely he obtained it from someone he knew, or it was placed on the rifle by someone other than Oswald.

In looking at the backgrounds of those who befriended Oswald on his return from the USSR, and knew him after he took the backyard photo of the rifle with another sling on it, as it has been determined that the sling was placed on the rifle sometime after the photo was taken and before the assassination.

Of those who knew him, many had connections to the CIA, Army, Marines and Navy – but there are very few former USAF personnel or offices who knew him personally or even enter the assassination narrative.
I can only find a few. For one, Oswald’s half-brother John Pic, who had previously served in the US Coast Guard in New York City, and had enlisted in the USMC Reserves, also entered the US Air Force and was in training at Lackland AFB in Fort Worth at the time of the assassination. But he has no known association with those SAC officers who could have had the sling or pistol in question, and wasn’t known to have even associated with his half-brother Lee at the time.

Two of those who worked at the Downtown Ford Lincoln Mercury dealership where Oswald or someone impersonating took a car for ride, were retired USAF officers, Phil Willis a Major and a Colonel who wrote western novels and shared an office with Jack Lawrence. But they are unlikely to be the source of the M-13 Sling.

As the FBI suspected, without knowing exactly what the sling was – inquired as to whether Oswald obtained it in New Orleans, where he spent the summer of ’63, from late April until late September.

Since Oswald was known to have associated with his former Civil Air Patrol (CAP) Captain David Ferrie, former FBI Agent Guy Bannister and their crew that summer, a close look at those guys would be appropriate.

In the spring of 1961, while Oswald was in the USSR, Bannister’s crew of misfits – including Ferrie, Gordon Novel, his wife Miss New Orleans Ms. Mancuso, a few Cubans and Thomas Beckman. They withdrew an arms cache of guns, ammo and explosives from the Schulmanger Wells company bunker at the former Navy Air Station at Houma, Louisiana. Some say they broke in and stole the stuff, others say they had a key, but it was owned by a company directed by French-Russian Jean DeMenil, of Texas, one of those who met Oswald when he returned from the USSR.

They piled the cache into cars and a laundry truck used by one of the Cubans, and took it to Bannister’s office and Ferrie’s home, as depicted in Oliver Stone’s “JFK.”

One of the participants, Thomas Beckman, bore a peculiar similarity to Oswald, being a former Army Reservist who dry fired a carbine, as Oswald was said to have done on his porch in New Orleans.
Beckman also lit sticks of dynomite and threw them out of the window on the way home, which makes me seriously doubt that theses Big Easy Bozos had anything to do with the Dealey Plaza operation, other than to help set up the Patsy as the fall guy, something they didn’t even know they were doing.

Unbelievably, Thomas Beckman had a pass to get on Barksdale Air Force base, in Louisiana, that had a SAC unit stationed there. The pass was attributed to his friend, a Colonel Lowrey (First Name Unknown and it could be spelled Lowry), who just happened to be the commander of “Looking Glass” – a Command and Control post that was flying over Dallas at the very moment of the assassination. We know this because the plane called in to US Army Fort Hood for a radio check at that time.

When testifying before the New Orleans Grand Jury, Beckman was asked how he came to meet Colonel Lowrey. When he replied, “It’s a long story,” the Assistant District Attorney said, “Never mind then.”
It was explained that Colonel Lowrey gave the pass to Beckman because they were business partners in a Thrift Shop, that Lowry and his wife assisted in the payment of rent ($700), helping Beckman much like the Paines assisted the Oswalds.

While Lowrey’s assistance to Beckman was two years earlier than Oswald’s return to New Orleans, if Lowrey was still there and still associated with the Bannister-Ferrie-Shaw crew, he could have met Oswald and took a shine for him like it did with Beckman. And Lowrey would certainly qualify as one of those few SAC officers who would have been assigned a M-13 holster and accompanying aluminum Colt .38 sidearm, as used aboard SAC bombers and kept in the plane’s safe with the nuclear codes.

So while we try to get a manufacturer’s serial number from the sling and the holster, to see if we can positively identify its source, if I was a gambling man with money, I would put my chips down on Colonel Lowrey, as one of those who would have been assigned such a sling, holster and sidearm, and someone who could have associated with Oswald and his pals in New Orleans.

For more on Beckman and Looking Glass:
http://jfkcountercoup.blogspot.com/2019/08/looking-glass-x-3-jfk-assassination.html?m=1

Please Support JFKCountercoup Research if you can:


https://www.gofundme.com/f/supportjfkcountercoup
Posted by William Kelly at 8:06 AM

I very quickly located two ads for authentic slings. One states that the holsters and slings were "released to the military surplus market." The other - indeed, the one to which your post links - states that the sling came from the "old stock" of a gentleman who had owned a military surplus store in the 1950's and 60's. Isn't this by far the most likely origin of Oswald's sling - i.e., he bought it for 25 or 50 cents at a military surplus store, where it was nominally priced because it was an unattractive and ungainly contraption? It presumably would have appealed to Oswald precisely because it was cheap and would at least give a better appearance than the rope sling.

Why jump to some sort of dark speculation when a pretty obvious answer is staring you in the face?

It is pure speculation staring in your face that Oswald purchased the sling at a Military surplus store, as can be seen in the Backyard photo, he already had a sling, a different one. And it is not pure speculation that the sling on the rifle found in the TSBD was not just a USAF officer's sidearm sling, most USAF officers have .45 cal. automatic holster attached to their belts. This particular sling was meant to go over the shoulder of a SAC pilot, was designed specifically for the .38 special revolver that was made of Aluminumn especially for General LeMay and it was kept in the B52 safes that also held the nuclear codes as part of a survival kit. That's not some sort of dark speculation.