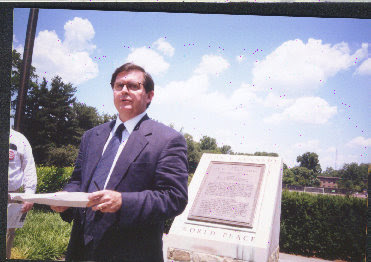 Dan Alcorn was the COPA lawyer who sued the Dept. of Defense to release the After-Action Reports of the military observers who had MLK under 24 hour surveillance and witnessed his murder. The military appealed and COPA lost the appeal, but Dan did a stand-up job in his oral arguments before the appeal's court. Although we lost, the miltiary suddenly found the long-lost After Action Reports and released them through a friendly fournalist.

Here's the press release from our first or second June 10th memorial service. John Judge, myself and two or three other people went the first year, and we organized a mini-conference around the second one, where we met in conference rooms and a half-dozen people stayed overnight in the AU dorm. Please note that we were calling for a grand jury and Congressional oversight then, and it seems like nothing has happened in between then and now.

In what may become an annual event, the Coalition on Political Assassination (COPA) is sponsoring a June 10th memorial service marking the 38th anniversary of President John F. Kennedy’s famous speech at American University in which he called for an end to the arms race and the Cold War because “we are all mortal.” Many believe this speech reflected the primary differences that JFK had with the Pentagon and the “military-industrial complex” Eisenhower warned of, and may have led to his assassination.

Beginning at 9:00 am on Sunday, June 10th, COPA will hold a series of conferences focusing on the new legal initiatives, including FOIA requests and appeals, the beginning of a lobby effort to get Congress to hold oversight hearings on the JFK Act, and the evidentiary support for a Federal Grand Jury Petition-Request that will be publicly released that day. There will also be reports of ongoing efforts to secure the release of the files on the HSCA records on the Martin Luther King, Jr. assassination and other Congressional records that remain withheld.

At 1:00 pm a memorial service will be held at the historic plaque at the outdoor sports field at American University which marks the site where JFK gave his famous speech, which is ranked with Washington’s farewell to his troops and Lincoln’s Gettysburg Address as one of the most significant speeches of our age.

After the 1pm memorial service, COPA will hold a press conference to announce two new legal initiatives – a Federal Grand Jury Petition-Requesting a proper inquiry into crimes related to the assassination of President Kennedy, and a public lobby effort for Congressional oversight hearings into the JFK Act and the Assassinations Records Review Board (ARRB). As part of this two-pronged effort, COPA will release the petition [See: Federal Grand Jury Petition] and start obtaining signatures of citizens who want to be party to the legal Request, while at the same time begin a lobby effort to get Congress to fulfill it’s responsibility to properly oversee of the JFK Act.

For those who would like to participate in both events – the memorial service and lobby effort, rooms will be available that Sunday night at American University. The next day, Monday June 11th, Congress will become the target of our offensive when we begin the battle of Capitol Hill by delivering packets of information to members of the Senate Government Affairs Committee and other members of the House of Representatives. We will encourage them to fulfill their responsibility to enforce the laws that they enact, especially the JFK Act, on which rides the American public’s confidence in the government.

Judge John Tunheim, Jim Lesar, Gary Aguilar and others important witnesses are expected to be called to testify to the success and failures of the JFK Act, the work of the Assassinations Records Review Board (ARRB) and the response of the agencies and departments of government to the law that remains in force, and will remain in force until the last document regarding the assassination is released. It’s not a question of whether there will be oversight hearings on the JFK Act, it is only a matter of when they will occur, and this COPA conference will begin the proceedings. Be there and help make it happen.

It will also be an opportunity for researchers, academics and lawyers to get together and help develop plans of action that will lead to the release of more records and even a possible legal resolution to the most significant criminal political event of the past century.

Those who would like to attend the Sunday conference and memorial service and participate in the lobby effort the following day can arrange to stay with us at Anderson Hall, American University, where we have reserved a block of rooms [Single or double occupancy $74 per night plus 14.5% local tax]. Anyone interested in these accommodations for Sunday night RSVP ASAP to: John Judge at copa@tidalwave.net [or (202)-583-5347].

Those interested in attending and participating in the conference and/or contribute to the Federal Grand Jury Petition-Request or the lobby effort for Congressional Oversight can contact Bill Kelly at jfkactsymposium@hotmail.com or andweareallmortal@yahoo.com [or (609) 653-6644 – bkelly@mca3.com]

Additional press releases and public notices will be issued.
Posted by William Kelly at 10:54 PM