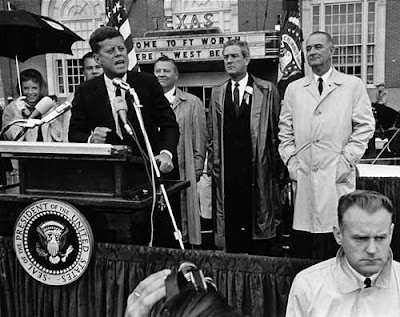 JFK in Fort Worth a few hours before he was to die.

Whose the man in the background beside John Connally and LBJ?

On the drizzly morning of November 22, President Kennedy, unexpected and unannounced, stepped outside to greet a crowd of thousands that had gathered outside the hotel in the rain for the mere chance of seeing him. Over Secret Service objections, the President gave a short speech to the drenched but appreciative crowd.

While others wore trench coats and hats to shield them from the weather, President Kennedy did not bother. Instead, he spoke to the crowd in a suit and tie. Those in the crowd close to the President clamored to reach his hands. It is estimated that 8,000 people gathered to hear his brief and unexpected speech. Little did this diverse crowd of Fort Worthians know that their hopes and dreams of a new America would be dashed hours later at Dealy Plaza.

After he delivered his unscheduled outdoor speech, he returned to the hotel for the formal Chamber of Commerce breakfast appearance. He and Jacqueline retired to their room to prepare for his Dallas visit. As the motorcade departed from the Texas Hotel, no one realized anything other than the pleasure of his visit. As the thousands of admirers departed, they would return to their work and homes only to later realize the true significance of the President’s Fort Worth stay.
Posted by William Kelly at 11:18 PM

Good Day Bill.... The man even with and to Connally's photo-left (between JFK's shoulder and Connally) is TX Senator Ralph Yarborough.

The man in the far background to LBJ's photo-right appears to be an unknown Texas Ranger, riding up on a horse.