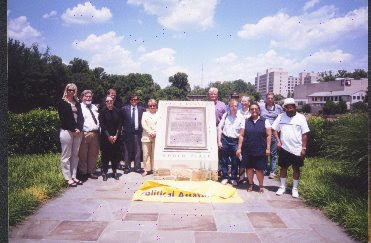 Here's my notes from this meeting at American University.

Although small in number, and we were all disappointed in the number of regrets, we all pretty well knew each other, as seven of us had been together at the Dallas COPA meetings at the Paramount last November, when the concept for the new legal initiatives were announced, and all of us went out of our way to be there. Acknowledging the short notice (six weeks), we all promised to return next year, so everybody will have a full year to prepare to get there, and it will be interesting to see a year from now, how far we’ve gone with our plans.

John Judge chaired the two meetings, with the morning session beginning a little after 9 a.m. With tables set in a conference setting in a square, with everyone facing each other. Before Dan Alcorn arrived, John Judge announced that Dan had decided NOT to pursue the COPA v. DOD FOIA suit, which was last heard unfavorably by the D.C. District Federal Appeals Court. He thought it a waste of time, energy and money we didn’t have to appeal the case to the Supreme Court.

Dan does however, agree with and supports the current grass roots effort to get Congressional Oversight Hearings on the JFK Act, which should also consider basic review of the FOIA Acts as well. Dan believes that Congress, once it recognizes the failures of the FOIA and JFK Acts, will move to strengthen the FOIA and ensure the JFK Act is properly enforced, two things that will assist us in our undertakings.

Since COPA’s time to respond to the Appeal’s Court decision has yet to expire, and they also gave COPA another alternative, other than an appeal to the Supremes, which I also believe would be a waste of time, I intend to ask Dan Alcorn if the other possibility could be worthwhile. The Appeals Court also said, in their last ruling, that COPA could request another hearing, at which additional evidence and possible witnesses could be presented. I think, with the identification of new military archives (Center for Military History at Fort McNair) and Army historians who have yet to testify, we should request another hearing.

When I mentioned the Center for Military History, John Newman said that there is also ANOTHER repository of Army records in Carlisle, Pennsylvania, near the U.S. Army War College, but not directly affiliated with it. We also have a new witness who can assist in helping to locate specific records, like the U.S. Army Intel. Surveillance records of MLK and those who were present at Dealey Plaza.

For the most part, the topics reviewed during this conference were either in regards to 1) the lobby effort to get Congressional Oversight Hearings of the JFK and FOIA Acts and 2) other legal avenues that can be pursued in regards to the JFK assassination.

Of all the potential legal initiatives that can be pursued, Congressional Oversight

Hearings will be the easiest to obtain, so strategy and tactics to achieve that goal were the primary topics of conversation.
Posted by William Kelly at 10:51 PM