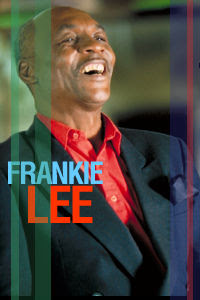 I had never heard of Frankie Lee before he was billed as the featured attraction at the Tony Marts nightclub reunion on Sunday (Aug.12, 2001) at Bubba Mac’s Shack in Somers Point, N.J., where I had witnessed, two nights previous, a jam session that included Band drummer Levon Helm, former Howlin’ Wolf guitarist Hubert Sumlin and various former members of Muddy Waters’ (Bob Margolin) and Howlin’ Wolf band members along with Muddy’s son, also a Morgenfield.

That was a hard act to follow, but then came Frankie Lee.

“We could have got another nostalgia rock & roll act for the reunion,” said the MC, Tony Mart’s son Carmen Marotta, as I got there and he was introducing the Frankie Lee band, “but we got something special instead. In 1963, when Tony Marts was in it’s heyday, Frankie Lee, who'se out of Waco, Texas, had a hit song on the charts.”

There was one empty seat at the far end of the bar, but I hesitated sitting down because there was a shot of whiskey and a lit cigarette in the ashtray, when a girl said, “Sit down, he won’t be needing the seat, he’s going on in a few minutes.”

Then there appeared Frankie Lee, spiffed up in his performance attire – white pin-stripped, double-breasted suit and wing tips, smiling, as his band began without him.

“Glad to meet you,” he said as he polished off the shot and took a drag.

“Four Time Lover,” he said with a hoarse voice, which he blamed on performing outdoors in the rain in Baltimore the previous night.

Being from Waco, Texas with a hit song in 1963, I asked Frankie Lee if he ever played in Dallas for Jack Ruby, at either the Vegas or Carousel Clubs. He coughed, caught his composure and said, “Hell, I was booked to play for Jack Ruby the night they killed Kennedy, but the show was cancelled because of assassination.”

A little taken aback, I asked him if he was supposed to play the Vegas Club, which featured rock & roll bands, or the Carousel Club, which had the girls, strippers, stand up comics and burlesque type shows, but also had live music on occassion. He said it was the Carousel Club.

Now into it’s third song, I thought a band like this would play the Vegas Club, but figured I would check it out with Beverly Oliver, who knew many of the entertainers in Dallas at the time, when Frankie Lee said, “Stevie Ray Vaughan and his brother covered ‘Four Time Lover’ in 1976.”

That, I figured, turned the song onto a whole new generation, so he was a two-time, one-hit-wonder. I also quickly learned that Stevie Ray's version of "Four Time Lover" also gave people the misimpression that Frankie Lee was a guitarist.

“Les Paul gave me a guitar one night before I went on," said Lee, "and I asked him what I was going to do with that?”

“With a name like Frankie Lee, he thought I should be a guitarist,” he laughed, as I told him, “You know, Stevie Ray lived in the same Oak Cliff, Dallas neighborhood as Lee Harvey Oswald, who used the alias O.H. Lee, and was called 'Mr. Lee' by his neighbors.”

Then I asked him, “If you were in Dallas that day, where were you at the time of the assassination?”

“I was right there,” he said, “about as far away from the motorcade as we are from that door,” pointing to about 50 feet away. While he didn’t see Kennedy get hit, “I heard the shots,” he said.

Another confirmation of the official version of events, I thought, as I asked him where he was standing.

“I was right by that building – the School Book Depository, where they say the shots came from, but they didn’t come from there.”

Then where did they come from?

“The FBI, the Secret Service, the CIA, they all talked to me, and didn’t believe I was suppose to work for Ruby that night and was at the scene. They put some pressure on me, but I told them I don’t know nothing. I never even met Ruby or knew who he was.”

And then, just as I was about to ask him if he was the Frankie Lee of Dylan's "Frankie Lee and Judas Priest” from the Dylan song, the band announced, “And now ladies and gentleman, here’s Frankie Leeeeee!….” and in a flash he as on stage, singing the blues, rhythm & blues and milking the audience like an energetic pro, sort of in the order of Otis Day and the Knights “Sham a Lam a Ding Dong,” or the Isley Bros “Shout.”

He sang, “Cry Me A River” and “Going Back to Mexico,” and eventually got the entire room up and clapping if not dancing.

When he was finished, I got his business numbers from him, and booked him for the Adolphis Hotel, Friday, late afternoon, November 23, 2001, for a gig, about 50 yards from the old Carousel Club, a raincheck for a gig that was canceled ‘cause of assassination.'
Posted by William Kelly at 8:54 PM