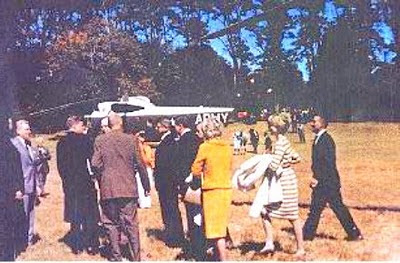 While at Milford, Kennedy met the staid, conservative, Republican mother of Mary Pinchot Meyer, whose political family went back generations and included a governor. Mary is seen here in the stripe dress. There are other pictues in this series, including one of them getting out of the helicopter.

"...A free spirited blonde in her early forties, she was the product of the eccentric, blue-blooded Pinchot family. After divorcing the brainy, intense CIA propaganda master Cord Meyer, she had refashioned herself as a Georgetown bohemian, setting herself us pas a painter in a studio behind the Bradlee's N Street house."

"...They had met when they were both in prep school - the charming scrawny Choate senior had cut in on her while she was dancing with her date, William Atwood (who would later serve Kennedy on an important diplomatic mission), at a school dance in 1935. They met again in San Francisco after the war, when she accompanied her new husband to the United Nations founding conference, which Kennedy was covering for the Hearst papers. The two men took an instant dislike to each other, a mutual hostility that never faded away, even when the Meyers moved next door to Hickory Hill, which was first owned by Jack and his new bride before they sold it to Bobby and Ethel."

Cord Meyer had served in the US Marines and was wounded at Guam, his twin brother would die at Okinawa, and after the war he would form the American Veterans Committee, a liberal rival to the American Legion, and found the United World Federalists, which worked towards a world government.


The clock started clicking on this day, September 24, 1963, when things were set into motion that would lead to what happened at Dealey Plaza. From Milford, the President would fly to Wisconsin, the first part of his Conservation Tour, from where they would announce the President's trip to Texas in November, and Lee Harvey Oswald would leave New Orleans for Mexico City.

It was also the day that the CIA gave the "Valkyrie" briefing on Cuban covert actions to the Joint Chiefs of Staff, temporarily under the chairmanship of Air Force General Curtis LeMay ( While Taylor was in Vietnam).

LeMay would assign General Krulak to provide the CIA maritime raiders with whatever they needed.

All the forces that would lead to the President's assassination were put into motion on this day - September 24, 1963.
Posted by William Kelly at 11:13 PM

Who was Cord Meyer Jr.? Meyer objected to Kennedy's relationship with his wife. Options

The murder of Mary Pinchot Meyer


On 12th October, 1964, Mary Pinchot Meyer was shot dead as she walked
along the Chesapeake and Ohio towpath in Georgetown. Henry Wiggins, a
car mechanic, was working on a vehicle on Canal Road, when he heard a
woman shout out: "Someone help me, someone help me". He then heard two
gunshots. Wiggins ran to the edge of the wall overlooking the towpath.
He later told police he saw "a black man in a light jacket, dark
slacks, and a dark cap standing over the body of a white woman."


Soon afterwards Raymond Crump, a black man, was found not far from the
murder scene. He was arrested and charged with Mary's murder. The
towpath and the river were searched but no murder weapon was ever
found.


The media did not report at the time that Meyer had been having an
affair with John F. Kennedy. Nor did it reveal that her former husband
was a senior figure in CIA's covert operations. As a result, there was
little public interest in the case.


During the trial Wiggins was unable to identify Raymond Crump as the
man standing over Meyer's body. The prosecution was also handicapped
by the fact that the police had been unable to find the murder weapon
at the scene of the crime. On 29th July, 1965, Crump was acquitted of
murdering Mary Meyer. The case remains unsolved.

Meyer, later admitted: "Mr. Meyer didn't for a minute think that Ray Crump had murdered his wife or that it had been an attempted rape. But, being an Agency man, he couldn't very well accuse the CIA of the crime, although the murder had all the markings of an in-house rubout."
Cont'd

This is very interesting! I just watched a program that mentioned her and thats why i researched her. Thanks for the insight raymond!