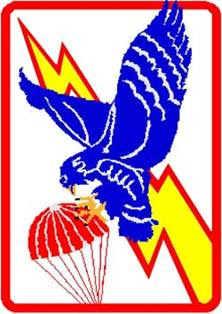 The 6594 Test Squadron wasn't really a test squadron at all, but was a secret out that was part of the Gen. LeMay's Strategic Air Command (SAC), flying "Boxcars" out of Hawaii with the sole mission of picking up CORONA spy satellite cameras as they descended from space by parachute.

They would then fly the Itek camera and film to Rochester, New York to the secret lab at the Kodak headquarters at "Hawkeye Works," where the film was processed and then distributed to "policy makers."

Lockhead made the rocket, Itek made the camera and Kodak made and processed the film.

Is this the secret lab where they also took the Zapruder film?

Significance: The emblem is symbolic of the squadron and its mission against a lightning streak representing the speed and accuracy of the unit’s test operations, a falcon (representing the sharp mind and keensight required by crew members and the flying skill exhibited by the pilots) is displayed in flight grasping a parachute (symbolizing the ability of the aircraft to retrieve a parachuting satellite from celestialregions).

Because the falcon is known for its fierce determination to follow through on anything it undertakes, it represents the spirit of the squadron to succeed at the most unusual aerial recovery in modern aviation history. The emblem bears the Air Force colors, ultramarine blue and golden yellow, and the nation colors, red, white and blue.

2. Attached is the official painting of the emblem described above, to be forwarded to the unit for file and guidance in reproduction.

Teuvo A. (Gus) Ahola commanded the 6594th Recovery Group and was responsible for the total CORONA recovery effort. Gus supervised extensive training of the Test Squadron crews and improved on techniques and overall familiarization in flying the probable ocean recovery areas. His emphasis on training and rehearsals with the Navy were critical to the success of CORONA recovery operations.

Everett E. (Andy) Anderson was a navigator with the 6593rd Test Squadron (Special) and participated with the Operations Staff of the 6594th Recovery Control Group. Andy coordinated operational matters with the various participants of the recovery effort, designed and installed equipment for Victory ships for aircraft pickup of the CORONA buckets. He was a special training project officer for recovery gear and DF gear crews on aircraft.

Harry L. Conway was the pioneer in air-to-air pickup of space capsules used in the CORONA Program. As early as 1943, he pioneered procedures at Wright-Patterson Field for aerial pickup of downed airmen from the ground. In the 1950s, Harry was a key engineering assistant for the full development of the aerial pickup technique as employed by the CORONA Program. As a industrial consultant, he worked with the 6593rd Test Squadron (Special) where he trained pole handlers, aircrews, and winch operators in preparations for a successful recovery.

Arthur H. Grafe was an Operations Officer with the 6594th Recovery Control Group. Art prepared operations orders and conducted conferences with the various CORONA participating support organizations including several Air Force, Navy, Coast Guard, and FAA elements. He conducted a final combined briefing for all the participants on the day of each mission. Art had an outstanding grasp of the many details that had to be thoroughly examined and procedures worked out in specific detail.

Janet Tsutomi was the Commander's secretary who worked continuously from the day of activation until the unit's final deactivation (December 1958 to September 1986). Janet was skillful, intelligent, tactful and possessed an outstanding attitude. Janet was a totally dedicated person--all of which contributed greatly to the success of the Recovery Control Group's mission.
Posted by William Kelly at 3:04 AM

Where did Gen. Curtis Lamay and SAC fall into this story?

As far as this aspect of the story, the SAC were responsible for retreiving the Satelite photos from a falling parachute over the Pacific and flying the film to Rochester, NY where they were processed at the Hawkeyeworks Lab at Kodak HQ. LeMay wanted the AF to take over all U2 and Satelite recon. - BK