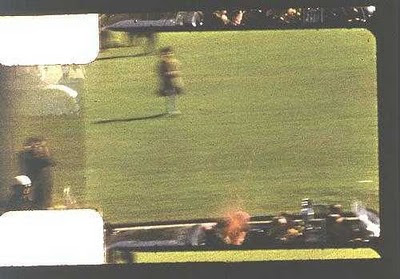 Posted by William Kelly at 6:00 PM

The Camera Owners Manuel, page 13, shows a shutter speed of 1/35
second for the normal run time of 16 fps

MR. SPECTER: HOW WAS THE SPEED OF THE CAMERA ASCERTAINED?

WE OBTAINED FROM MR. ZAPRUDER, MR. NIX, MRS. MUNCHMORE THEIR CAMERAS FOR EXAMINATION, AND IN THE FBI LABORATORY EXPOSED FILM IN ALL THREE CAMERAS AIMING AND FOCUSING THE CAMERA ON A CLOCK WITH A LARGE SWEEP SECOND HAND

In 1963, camera speed and projector speeds were not compatible. Even if Z's camera was filming at 16 fps. and it was shown on a projector that filmed at a different speed, we have a problem. In those days it was common to have to adjust the speed of the projector so that the film was easier to watch. The FBI was showing the film on a projector and timing the entire 486 frames and clocking the time it took to view the film. They then divided the time into 486 and came up with 18.3 On
another projector, the result could have been different. However, since they told the public that the 18.3 was correct,and they used
that figure to determine the time between shots --- from then on that figure became gospel. Even if they showed the film on another projector they adjusted the showing speed to the 18.3 speed even if it changed the viewing to be slower or faster. Later on, camera speeds and projector speeds were made to be the same. But not in 1963 with Zs
film

"The commercially advertised rate was 16 fps, but the actual camera
rate was 18 fps. This has been confirmed by EVERYONE'S camera tests."

If the camera was shooting at 16 frames per second instead of 18.3 you must add 15% to the entire time which would change the time of everything including the time between shots, the speed of the
CONT'D