Man in the Window 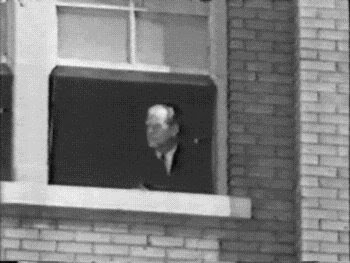 Man in the window. It's Gerald Ford.

Larry King: You are the last member of the Warren Commission.

Ford: That is correct.

King: Ever had a doubt that there was anyone other than Lee Harvey Oswald was involved?

Ford: I reiterate, that we, as a seven member board – commission, we said that Lee Harvey Oswald committed the assassination, and we as a commission, found no evidence of a conspiracy, foreign or domestic. We agreed on that unanimously. I think today, I have the same strong feeling.

King: So you haven’t wavered?

King: Were you rushed? Some say that President Johnson put a rush on you to get this all done.

Ford: It was desirable to get it completed prior to the elections of 1964. We had 13 months to do it, to carry out our responsibilities as a commission, so I think we had ample time Larry, but the elections coming up really did not interfere with our judgements.

King: One of the reasons conspiracy theorists hold force is that it’s hard to accept that one lone man could change the world.

Ford: Let me say this Larry, there are critics, cynics as to who killed Abraham Lincoln.

Ford: And that’s over 100 years ago. So I’m sure you are going to have people in addition to Oliver Stone and some other people in the years ahead who will say the same thing, but the truth is, I have seen no, new credible evidence that will change my mind.
Posted by William Kelly at 11:03 PM

RE Man or men in the window:
The game is called, Is There A Face In The Window.
Tools required to play:
1. The 888 page Report of the President's Commission on the
Assassination of President John F. Kennedy. (Opened to page 66,
Dillard Exhibit C)
2. Richard B. Trask's, Pictures Of The Pain. (Opened to pages
451-452)
3. A magnifying glass.

This is a game where no one gets hurt and no one wins. The players
only get to have one more topic to disagree on. I have played the game many times and have an opinion.

Let's play and see if you agree with me, or decide to join the other team.
First, read the following:
" Look up in the window! There's the rifle."
These were the words yelled by Bob Jackson after the third shot was fired at the presidential
motorcade as it moved past the School Book Depository headed for the Triple Underpass.

Robert H. Jackson, a staff photographer for the Dallas Times
Herald, was riding in a press car eight or nine cars from the front of the motorcade. In the car with Jackson was another photographer,
Thomas Dillard, the chief photographer with the Dallas Morning News, James Underwood, of television station KRLD-TV, and Malcom O. Couch and James Darnell, both television cameramen.

"Dillard ,Couch, and Underwood confirmed that Jackson
spontaneously exclaimed that he saw a rifle in the window. According to Dillard, at the time the shots were fired he and his fellow passengers, 'had an
absolutley perfect view of the School Depository from our position in the open car.' Dillard immediately took two pictures of the building:
one of the east two-thirds of the south side and the other of the
southwest corner , particularly the fifth and sixth floor windows. These pictures show three Black men in the windows of the fifth floor and the partially open window on the sixth floor above them."

Each of these men eventually testified and their testimony is on record for their observation of the scene, however, it will be the Dillard Exhibit C. photo that will be the prime subject of this short paper. Also, the success of my personal objective will depend on some speculation and a degree of open-mindedness of the reader.

For years, Dillard's photo has engaged the eyes and minds of
thousands of interested researchers. And, despite the exposure of the photos to public scrutiny, no one had seen anything in the photo that
appeared unusual. Or, was there something in the photo that aroused an interest in the minds of at least a few people?

In Richard Trask's fine book, Pictures Of The Pain,the author
describes an interesting episode that seems to have gone unnoticed by researchers. Trask tells us: "During the congressional House Select Committee on Assassination's investigation in 1977-78, both the original negatives and a copy of the Powell transparency were examined
by the photographic panel for evidence of a gunman." (p.451).