Man on the Grassy Knoll 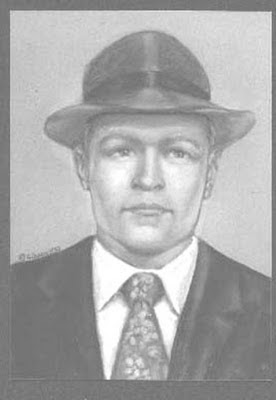 This is a sketch of the Man on the Grassy Knoll by Houston PD Lois Gibson as described by witnesses Malcolm Summers.

Malcolm Summers ran to the knoll moments after the shooting. He related the following in the 1988 documentary Who Murdered JFK?:

"I ran across the--Elm Street to right there toward the knoll. It was there [pointing to a spot on the knoll]--and we were stopped by a man in a suit and he had an overcoat--over his arm and he, he, I saw a gun under that overcoat. And he--his comment was, "Don't you all come up here any further, you could get shot, or killed," one of those words. A few months later, they told me they didn't have an FBI man in that area. If they didn't have anybody, it's a good question who it was. " (Anderson 14)

DALLAS (Reuters) - Malcolm Summers, one of the closest eyewitnesses to the John F. Kennedy assassination, has died of a heart ailment at age of 80, a funeral home said on Monday.

Summers heard Jacqueline Kennedy and Texas Gov. John Connally scream from the presidential limousine as it rolled through Dealey Plaza in Dallas on Nov. 22, 1963.

Summers, who was just a few yards from the incident, can be seen on the famous movie of JFK assassination shot by amateur photographer Abraham Zapruder as the man diving to the ground as the shots rang out.

"I heard Connally say, 'They're going to kill us all!" or 'shoot us all!' I'm not sure which one on that deal. And then, I heard Jackie Kennedy scream out, 'Oh, God! No, no, no!' And it was a shrill. It was very sad to hear that when you think back," Summers said in an oral history recorded by the Sixth Floor Museum -- a Dallas museum dedicated to the JFK assassination.

Summers told police in a deposition at the time of the assassination he thought someone had set off a firecracker and hit the ground when he realized shots were being fired.

Summers was born in Dallas and died on Oct. 8.
Posted by William Kelly at 11:10 PM

Labels: Sketch of Man on the Grassy Knoll

As every single famous murder it is so difficult to know who killed the person and I've never understand if the government invest a lot of money on the army why the can find it if it is suppose that there's many technology to do it.Viagra Online

because, Carmina, in this case, if I understand you right, it's not really important who pulled the trigger or how many they were and if they were Cuban exiles, mafia men, or whoever. It's important to understand who played a part in the aftermath, cover-up, and therefore had knowledge and took part in that coup-d'etat.
LBJ, with his friend Hoover, established the Warren Commission and chose its members.
They took f.e. Allen Dulles, who established the CIA and got fired by JFK, but not Bobby Kennedy (brother of JFK -he would be the perfect choice to find the truth as he was ATTORNEY GENERAL, but they even didn't take him into the seven man commission - for an obvious reason..)
Therefore: WE have parts of the CIA, the FBI, the military (altered autopsy), the government (LBJ, Ford -got rewarded later), the Secret Service, Dallas Police, the mafia and that Cuban exiles group were just peanuts (they'd have zero power to cover that up until today). I know it's huge but not impossible